Clarksville, TN – On September 4th, 2017, Clarksville Police responded to a shooting on Carter Road. They found a 28 year old male lying partially in the roadway who had been shot. He was Lifeflighted to the hospital, underwent surgery and is now in stable condition.

On September 12th, 2017 around 2:55am, Quantavious Golliday was booked into Montgomery County Jail and charged with Two Counts of Aggravated Assault and Simple Possession. His bond was set at $170,000.

Around 10:45pm on September 11th, 2017, a traffic stop was made on a vehicle in the area of Cumberland Drive and Woodmont Boulevard.

As the officer approached the vehicle, he recognized Golliday as a passenger in the vehicle and knew he had warrants on file in conjunction with a shooting at 412 Carter Road. Before the officer could reach the vehicle, it sped away from the scene at a high rate of speed.

Patrol officers using some good old fashioned police work and tenacity were able to track down Golliday to an Oak Lane residence, where he was taken in custody.

Additionally, when he was arrested, there were drugs found in his possession. 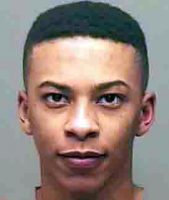