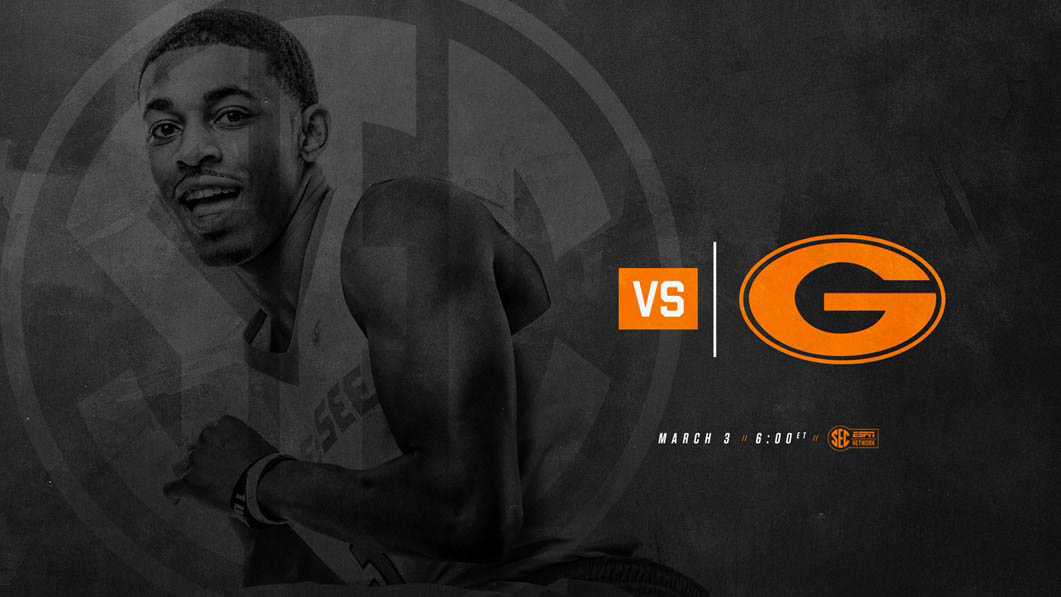 Knoxville, TN – With a chance to at least claim a share of the SEC Championship, 16th-ranked Tennessee wraps up the regular season against Georgia in Thompson-Boling Arena on Saturday. The game tips at 5:00pm CT and will be televised live on SEC Network and streamed online via WatchESPN.

The Volunteers (22-7, 12-5 SEC) can claim a share of the regular-season championship with a win, but if Auburn loses to South Carolina and UT wins, Tennessee would pass the Tigers for the top spot in the SEC and would be the outright champion after being picked to finish 13th in the preseason. The Vols sealed their top-2 finish on Tuesday with a dominating win at Mississippi State behind 24 points from Admiral Schofield. The junior forward is averaging 21.7 ppg and 7.3 rpg during UT’s three-game winning streak. 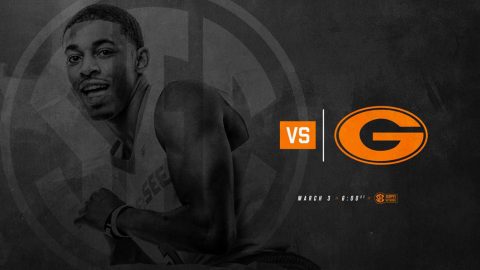 Although a sold-out crowd will certainly benefit the team, Tennessee doesn’t have an easy matchup on Saturday. In the first meeting between the Vols and Bulldogs just two weeks ago, UT came up short in a 73-62 game.

After UGA started second half on 10-2 run, Tennessee fought back to make it a two-point game with 7:57 left. That would be as close as the Volunteers would get, as the Bulldogs used an 8-2 run to make it a 59-51 game with less than five minutes to play.

Georgia (16-13, 7-10 SEC) lost two of its last three, including a 61-60 setback on Wednesday against Texas A&M during senior night. SEC Player of the Year candidate Yante Maten leads the Bulldogs in scoring (19.4 ppg), rebounding (8.8 rpg) and blocked shots (43), while ranking second in assists (46) and steals (13). In the first meeting, Maten finished with 19 points to lead all scorers.

After Saturday’s showdown, UT will prepare for the SEC Tournament. With a double bye clinched, the Vols won’t play until Friday. Depending on the results Saturday, UT will be one of the top-two seeds for the tournament.

SEC Co-Player of the Week Admiral Schofield is averaging 21.7 points and 7.3 over UT’s last three games.

Give the Vols at least a share of the regular-season SEC Championship; it would be their first since 2008.

Give Tennessee at least 22 victories for just the 10th time in program history.

Ensure that Tennessee will finish the season with a single-digit loss total (last happened in 2009-10; nine losses).

About the Georgia Bulldogs

In its non-conference slate, Georgia picked up wins over Georgia Tech, Marquette, Saint Mary’s and Temple. In SEC play, UGA boasts wins over Alabama and a season sweep over Florida.

SEC Player of the Year candidate Yante Maten leads the Bulldogs in scoring (19.4 ppg), rebounding (8.8 rpg) and blocked shots (43), while ranking second in assists (46) and steals (13). The senior forward is the SEC’s active career scoring leader, rebounder and shot-blocker.

On the season, Maten is the league’s leading scorer and ranks second in rebounds per game. He’s posted 13 double-doubles this year and can score from anywhere on the floor. He has a knack for getting to the free-throw line, where he’s shooting an impressive 81 percent (169-of-208).

Entering Saturday’s matchup, the Bulldogs have lost two of their last three, including a 61-60 loss on Wednesday against Texas A&M. Maten finished with 16 points and 12 rebounds on his senior night, but it wasn’t enough to keep up with four double-digit scorers for the Aggies.

Despite a double-double from Kyle Alexander, No. 18 Tennessee fell on the road to Georgia, 73-62, at Stegeman Coliseum on February 17th, 2018.

Alexander finished the game with 10 points and a career-high-tying 13 rebounds, marking the second double-double of his career. He was joined by Jordan Bowden (13), Admiral Schofield (11) and Lamonté Turner (14) as the Vols’ double-digit scorers.

After UGA started second half on 10-2 run, Tennessee fought back to make it a two-point game with 7:57 left. That would be as close as UT could get, as the Bulldogs used an 8-2 run to make it a 59-51 game with less than five minutes to play.

After a pair of missed free throws by the Bulldogs with 1:20 left in the game, Turner drained a three to make it a two-possession game at 63-58 with 1:11 remaining, but Tennessee was unable to complete the comeback.

SEC Player of the Year candidate Yante Maten fueled UGA on both ends of the floor, posting 19 points and five rebounds in 31 minutes of action. Derek Ogbeide dominated the paint, finishing with 16 points and 11 rebounds.

After starting the game shooting 5-of-20 from the field, Tennessee ended the half with the hot hand, knocking down six of its final nine shots in the frame to draw within one possession, 28-26, heading into the break.

Tennessee used a 14-7 run to end the half while holding the Bulldogs without a field goal in the final 2:48 of play. Schofield led the team in scoring during the period with six points, while Maten posted 11 points to pace Georgia.

Austin “Red” Robbins had what may have been the best performance in UT history at the time with 35 points and 20 rebounds on February 7th, 1966, as UT routed Georgia 100-71 at old Armory-Fieldhouse in Knoxville.

Future NBA Lottery Pick Marcus Haislip paced the Vols with 18 points and 11 rebounds, while Vincent Yarbrough added 17 points as UT outscored the 16th-ranked Dawgs 11-3 in overtime to take a 71-63 win in Knoxville on March 2nd, 2002.

Legendary Tennessee head coach Ray Mears was at his best against Georgia. Mears was 25-4 vs. UGA during his tenure on The Hill (1962-78).

During Oliver’s tenure in Athens with Felton—who himself was once an assistant under Rick Barnes at Providence and Clemson from 1992-98—the Bulldogs made consecutive postseason appearances in 2007 (NIT) and 2008 (NCAA Tournament).

Oliver was on UGA’s staff during one of the most memorable conference tourney runs in recent history when Georgia won two games on the same day to capture the 2008 SEC Tournament championship.

Tennessee Was Picked 13th In SEC

Tennessee was predicted to finish 13th in the 2018 SEC race by an SEC and national media voting panel. The Volunteers also were picked 13th last season before posting an 8-10 SEC record to finish ninth.

The Vols have outperformed their preseason SEC projection every season under head coach Rick Barnes.

Rick Barnes is in contention to capture his fourth regular-season conference crown as a head coach. Barnes previously led Texas to Big 12 titles in 1999, 2006 (co-champs) and 2008 (co-champs).