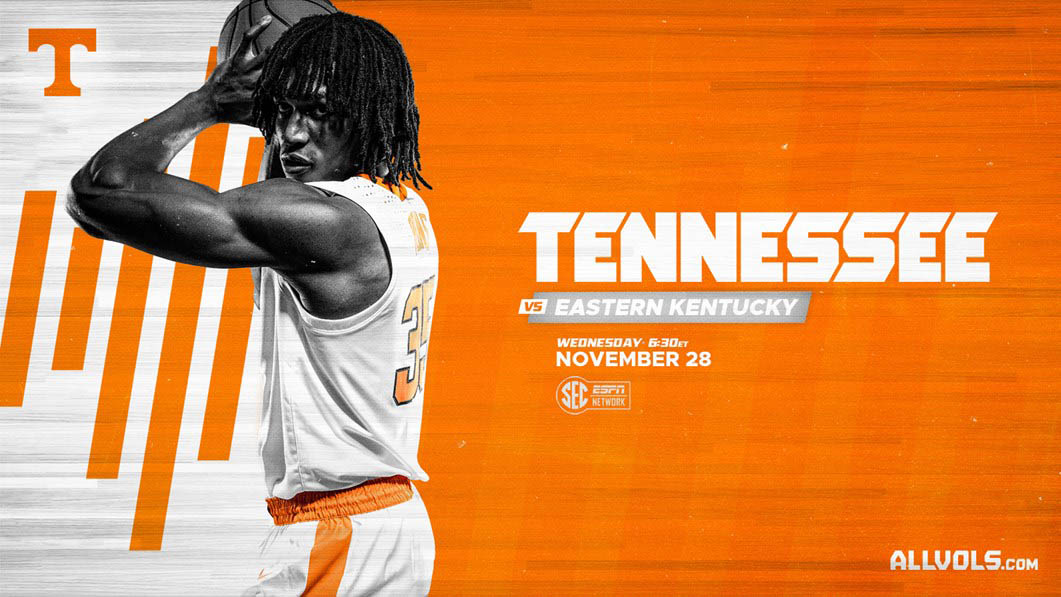 Knoxville, TN – The Tennessee Volunteers will play their 500th game in Thompson-Boling Arena on Wednesday night, as they host Eastern Kentucky for a 5:30pm CT tip.

SEC Network will carry the broadcast, which can also be streamed online through WatchESPN. Fans can also listen live on their local Vol Network affiliate to hear Bob Kesling and Bert Bertelkamp describing the action. Tickets are still available online at AllVols.com.

Tennessee (4-1) is coming off a trip to New York after playing in the NIT Season Tip-Off. UT split its two games in the Barclays Center, defeating Louisville in the semifinals, 92-81, and dropping a hardfought matchup against No. 2 Kansas, 87-81, in overtime. 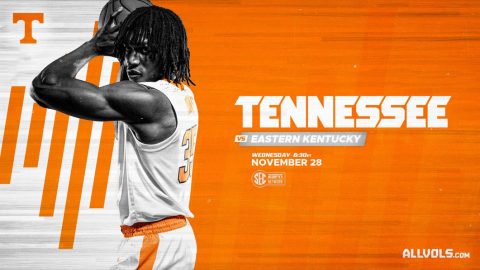 Grant Williams was named the SEC co-Player of the Week after the tournament, averaging 21.0 points, 8.5 rebounds, 5.0 assists and 2.0 blocks per game.

He was also named to the NIT Season Tip-Off All-Tournament Team along with Jordan Bone.

Bone posted 13.5 points, 5.5 assists and 4.0 rebounds per game during the tournament. Against Kansas, he finished with 16 points on 6-of-10 shooting to go along with six rebounds and five assists.

The Vols own a 56-2 all-time record against current members of the Ohio Valley Conference.

Improve UT’s record vs. current members of the OVC to 57-2.

This is Tennessee’s 500th men’s basketball game at Thompson-Boling Arena. The riverfront venue that seats 21,678 opened for the 1987-88 season.

The Volunteers are 370-129 at Thompson-Boling Arena.

Tennessee has committed fewer turnovers than its opponent in all five games this season.

Williams also was named the SEC Co-Player of the Week.

The Vols and the Colonels are set to meet for the first time in more than a decade, with UT looking to preserve its perfect record in a series that dates to 1912.

A.W. Hamilton is in his first year at the helm of a collegiate program after spending just one season as an assistant coach at NC State, but the two-time National Prep Coach of the Year excelled as head coach during his six seasons at Hargrave Military Academy, where he boasted a record of 237-22 and led his team to the 2016 National Prep Championship.

Eastern Kentucky (3-3) lost some key players from last year’s squad, but three-time All-OVC first-team selection Nick Mayo is back for his senior season. Mayo is on pace to become the program’s all-time leading scorer and is one of only six Colonels ever to record 1,500 points and 500 rebounds in a career. He also holds EKU’s career blocks record (132).

This season, Mayo is averaging 25.0 points and 9.2 rebounds per game. In a game at Chattanooga earlier this month, Mayo dropped 40 points on 12-of-23 shooting in a win over the Mocs.

Lachlan Anderson is another player to keep an eye on for the Colonels. The junior forward is second on the team in scoring (9.8 ppg) and rebounding (5.8 rpg).

Tennessee took advantage of 25 turnovers by Eastern Kentucky. The Big Orange improved to 3-0.

Wingate, whose previous career high was 14 points against Kentucky last season, was 6-of-8 from the floor and made all six of his foul shots. Lofton, who hit 4 of 8 shots from 3-point range, had two points at halftime and was 0-of-4 from the floor.

Eastern Kentucky was led by Mike Rose with 13 points, and Jason McLeish and Alonzo Hird with 12 each.

Tennessee joins Iowa as the only schools in the nation whose men’s and women’s basketball teams both are ranked in the AP top 15.

The Vols are ranked sixth in the country, while the Lady Vols are the AP’s 11th-ranked team.

Tennessee Vols At Home During The Barnes Era

The Volunteers own a 39-11 record at Thompson-Boling Arena under the direction of head coach Rick Barnes.

With Barnes on the bench, Tennessee is 18-9 at home against SEC opposition.

The Vols’ current 11-game home win streak is longest of the Barnes era.

Barnes has led the Vols to a 3-3 home record against AP top-25 opponents.