Nashville, TN – The Tennessee Titans (8-6) put a three-game winning streak on the line Saturday afternoon against the Washington Redskins (7-7). Kickoff at Nissan Stadium (capacity 69,134) is scheduled for 3:30pm CST on December 22nd.

The game will be nationally televised on NFL Network, and additionally the telecast can be seen in Nashville on WSMV News 4. The broadcast team includes play-by- play announcer Curt Menefee, analysts Nate Burleson and Steve Mariucci, and sideline reporter Melissa Stark.

Westwood One Sports will broadcast the game to a national radio audience. Play-by-play announcer Scott Graham, analyst Jason Taylor and sideline reporter Hub Arkush will have the call.

Tennessee Titans In The Playoff Hunt With Two Weeks Remaining

The Tennessee Titans traveled to face the New York Giants last week, enduring a cold, rainy afternoon to post a 17-0 shutout win. It was the franchise’s 16th shutout victory and the first since a 31-0 win against the Dallas Cowboys on December 25th, 2000. The win at New York marked only the fourth time the franchise went on the road and shut out an opponent.

Third-year running back Derrick Henry provided most of the offensive production, rushing for 170 yards and two touchdowns on 33 carries. It came one week after his team-record 238 yards against the Jacksonville Jaguars to give him another franchise record of 408 rushing yards in a two-game span. He broke Earl Campbell’s previous benchmark of 405 yards in two games from October 19th-26th, 1980.

Meanwhile, the Tennessee Titans defense forced two turnovers and recorded three sacks at New York. The Titans limited running back Saquon Barkley to his lowest rushing average of the season—2.2 yards per carry (31 yards on 14 attempts). The defense also kept Giants quarterback Eli Manning to a 54.1 passer rating, his lowest of the season. In the past two weeks, the Titans defense has held the Jaguars and Giants to a combined five conversions on 28 third downs, a rate of only 17.9 percent.

With their third consecutive win, the Tennessee Titans kept pace in the tightly-contested AFC playoff race. There are 10 AFC teams still alive for the postseason, and only the Kansas City Chiefs and the Los Angeles Chargers have secured an AFC playoff spot.

The Houston Texans lead the AFC South at 10-4, followed by the 8-6 Indianapolis Colts and Titans. The Texans travel to Philadelphia on Sunday to face the Eagles, while the Colts host the Giants.

Following their matchup with the Redskins, the Tennessee Titans will finish the regular season at home with a matchup against the Colts on Sunday, December 30th.

About the Washington Redskins 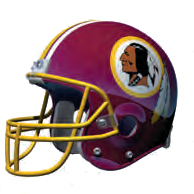 The Redskins traveled to Jacksonville last week. Facing a seven-point deficit in the fourth quarter, they came back and won on a 36-yard field goal by Dustin Hopkins as time expired.

Under fifth-year head coach Jay Gruden, the Redskins won six of their first nine games in 2018. However, starting quarterback Alex Smith was lost for the season with an injury on November 18th against the Texans, and then his backup, Colt McCoy, suffered a season-ending injury on December 3rd against the Philadelphia Eagles. They dropped four consecutive games before last week’s win at Jacksonville.

Since McCoy’s injury, Mark Sanchez (December 9th against the Giants) and Josh Johnson (December 16th at Jacksonville) have recorded starts at quarterback.