HomeNewsAAA reports Vehicle Escape Tools can be a Lifesaver, in the Right...
News

AAA reports Vehicle Escape Tools can be a Lifesaver, in the Right Situation

Orlando, FL – According to new research from AAA , most vehicle escape tools, intended to quickly aid passengers trapped in a car following an accident, will break tempered side windows, but none were able to penetrate laminated glass.

Motorists may not realize it, but an increasing number of new cars – in fact, 1 in 3 2018 vehicle models – have laminated side windows, a nearly unbreakable glass meant to lessen the chance of occupant ejection during a collision.

AAA urges drivers to know what type of side window glass is installed on their vehicle, keep a secure and easily accessible escape tool in their car and have a backup plan in case an escape tool cannot be used or doesn’t work.

In its latest study, AAA examined a selection of vehicle escape tools available to consumers to determine their effectiveness in breaking tempered and laminated vehicle side windows.

Of the six tools selected (three spring-loaded and three hammer style), AAA researchers found that only four were able to shatter the tempered glass and none were able to break the laminated glass, which stayed intact even after being cracked. During multiple rounds of testing, it was also discovered that the spring-loaded tools were more effective in breaking tempered windows than the hammer-style. 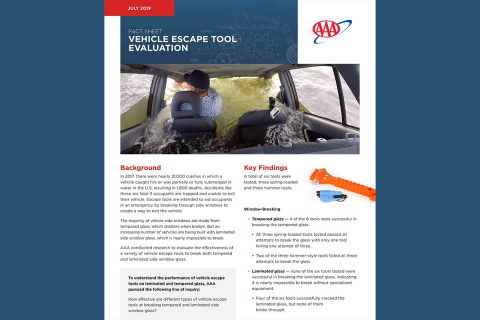 “To improve safety, more vehicles are being equipped with laminated side windows – but a majority also have at least one window made of tempered glass,” said John Nielsen, managing director of Automotive Engineering and Repair for AAA.

“Our research found that generally vehicle escape tools can be effective in an emergency, but only if drivers know what type of side windows they have, otherwise they could waste precious seconds trying to break glass that will not shatter,” Nielsen stated.

Drivers can determine the type of glass installed on their vehicle by first checking for a label located in the bottom corner of the side window, which should clearly indicate whether the glass is tempered or laminated.

If this information is not included or there is no label at all, AAA advises contacting the vehicle manufacturer. It is also important to note that some vehicles are outfitted with different glass at varying locations in the car (i.e. tempered glass on rear side windows versus laminated on front side windows).

The increased use of laminated glass is in response to federal safety standards aimed at reducing occupant ejections in high speed collisions. In 2017, there were an estimated 21,400 people who were partially or fully ejected during a crash, resulting in 11,200 injuries and 5,053 deaths. 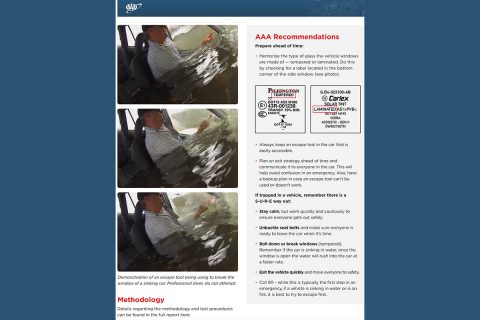 While these types of crashes are more prevalent, there are instances where vehicles may catch fire or become partially or fully submerged in water, forcing drivers and their passengers to exit the vehicle through a side window. In situations like this, vehicle escape tools can assist ahead of emergency responders arriving.

Vehicle escape tools come in many varieties, but AAA suggests avoiding tools with extra features such as lights or chargers since these functions do not improve the performance of the tool itself. Drivers should also remember that in the event their vehicle is submerged, a hammer-style escape tool (as opposed to a spring-loaded-style) will be ineffective underwater.

“Drivers should pick a tool they feel comfortable with and find easy to use, but most importantly they should store it somewhere that is secure and within reach following a collision,” added Nielsen.

Being prepared in an emergency can greatly improve the chances of survival, especially if drivers and their passengers have become trapped in the vehicle. AAA strongly recommends drivers do the following:

Prepare ahead of time:

If trapped in a vehicle, remember there is a S-U-R-E way out:

For testing methodology, refer to the full report by clicking here.

AAA provides more than 59 million members with automotive, travel, insurance and financial services through its federation of 34 motor clubs and nearly 1,100 branch offices across North America. Since 1902, the not-for-profit, fully tax-paying AAA has been a leader and advocate for safe mobility.