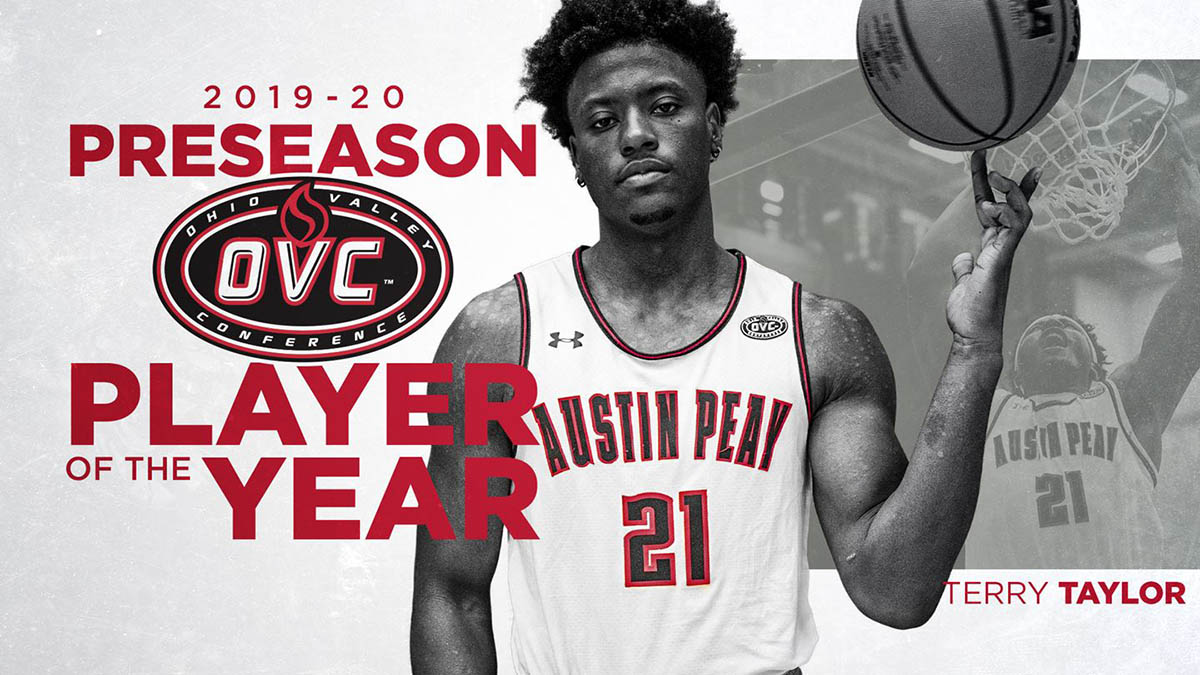 Evansville, IN – An Austin Peay State University (APSU) Governor is the Ohio Valley Conference Men’s Basketball Preseason Player of the Year for the first time since 2007. 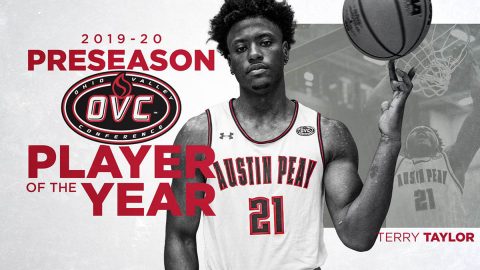 The Austin Peay State University forward and Bowling Green native earned the honor at Tuesday’s OVC Media Days at the DoubleTree Hotel in Evansville, which is nestled alongside the Ford Center, site of the 2020 OVC Men and Women’s Basketball Tournaments.

While Taylor was the main event—not only making the rounds for the second year in a row as a featured part of the day but also briefly speaking during the lunch portion of the event—the Govs also found themselves near the top of the league’s predicted pecking order once again.

Belmont was tabbed first with 237 points and 17 first-place votes, followed by Murray State, which garnered 223 points and the other seven votes. Jacksonville State (187) finished seven points ahead of the Govs (180) for third, with UT Martin (154) rounding out the predicted top-five.

Taylor, after averaging 20.5 points and 8.9 rebounds a year ago, led the Govs to 22 wins—their first 20-win season since 2010-11—and a second-straight appearance in the OVC Tournament semifinals. As one of four returners—buffeted by one of the greatest recruiting classes in program history—Taylor will be the featured piece for head coach Matt Figger‘s attack in his junior campaign.

Taylor will be one of the players to watch at the mid-major level in 2019-20. After surpassing both the 1,000-point and 500-rebound marks in his sophomore season, he’s one of just three returning players in the nation to have scored 1,000 points, grabbed 500 boards and shot better than 50 percent from the floor and 35 percent from three—the other two are both seniors (Vermont’s Anthony Lamb and South Alabama’s Josh Ajayi).

Figger also was in attendance for Media Day; the third-year head coach is one of the league’s rising stars in coaching circles, and once more charmed the on-hand scribes.

The Govs’ first of two exhibition contests tips off 7:00pm, Thursday, against Union; the regular-season tips off Tuesday, November 5th, with Oakland City visiting the Dunn Center. Four Power Five opponents are on deck in Austin Peay State University’s busy road slate, while the 14-game home schedule will span a gauntlet of Division I foes and conference opponents.

For more information on joining the Governors in the Dunn Center this winter, to secure season tickets or to become involved with the APSU Monocle Society, call 931.221.PEAY.