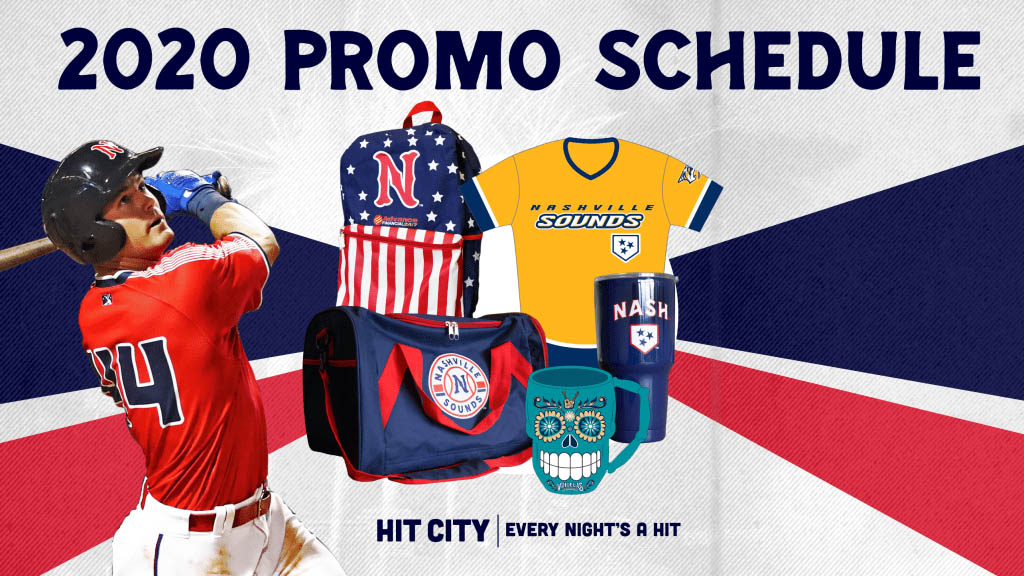 Single-game tickets will be available for purchase beginning Monday, March 9th at 9:00am at the First Horizon Park ticket office, online at www.nashvillesounds.com, or by phone at 615.690.HITS ext. 2. 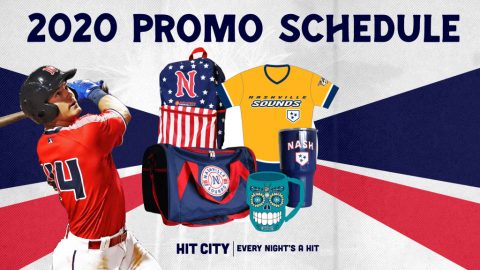 Fans will be treated to a postgame fireworks show on Opening Day. Additional Opening Day details will be revealed in late March.

The Hit City Opening Day Bundle goes on sale Thursday, March 5th and starts at $50.00 (tax & fees not included). It includes a limited edition Hit City hat, an all-you-can-eat buffet ticket with soda, water, lemonade and tea (1.5-hour service), access to Hit City Hall, the ballpark’s newest group hospitality area featuring an elevated experience in a climate controlled party tent, and fan choice of a Corner or Select section ticket on the first base side.

The Opening Weekend celebration continues Friday, April 10th with the 2020 Magnet Schedule Giveaway to the first 4,000 fans presented by FOX 17 News, and fans are invited to stay for the FOX 17 News postgame fireworks. Opening Weekend concludes on Easter Sunday, April 12th, with the 2020 Team Photo Giveaway presented by the Middle Tennessee Hyundai Dealers to all fans. Postgame activities include Kids Run the Bases presented by First Horizon and catch on the field for all fans.

First Horizon Park’s traditional fifth inning Country Legends Race will be represented with four separate giveaway dates in 2020, all presented by First Horizon. It starts on Sunday, May 17th as the first 2,000 fans can collect the Johnny Cash Wind-Up Figurine Giveaway. The Wind-Up Figurine Giveaway series continues with Reba McEntire on Sunday, June 14th. The final two in the series are George Jones on Sunday, July 19th and Dolly Parton on Sunday, August 16th. All four giveaways will be for the first 2,000 fans.

Themed weekends return to First Horizon Park this season beginning Friday, May 8th for 2000s Weekend. The celebration of the 2000s includes Nickelodeon Night on Saturday, May 9th. The Sounds will wear Nickelodeon-themed jerseys featuring SpongeBob SquarePants on Friday and Saturday with a jersey auction scheduled for Saturday.

On June 26th and 27th, the Sounds will again participate in Minor League Baseball’s Copa de la Diversión® (Fun Cup™) event and transform into Vihuelas de Nashville, complete with specialty jerseys and hats. On Saturday, June 27th, the first 2,000 fans will take home the Sugar Skull Mug Giveaway. Additionally, on Saturday fans will have the opportunity to participate in the specialty jersey auction.

Star Wars Weekend is set for July 17th and 18th with a Lightsaber Giveaway to the first 2,500 fans on Friday. Saturday will be complete with Star Wars character appearances and a specialty jersey auction.

A total of 18 giveaways are sprinkled throughout the schedule, with many falling on Thursdays and Sundays.

Memorial Day Weekend will be full of excitement at First Horizon Park with a postgame fireworks show scheduled for Sunday, May 24th and the Stars and Stripes Backpack Giveaway presented by Advance Financial to the first 2,000 fans on Memorial Day.

The Sounds are teaming up with their crosstown friends to bring the Nashville Predators Replica Jersey Giveaway presented by Vanderbilt Health to the first 1,000 adults and 1,000 children on Saturday, June 13. The Predators Energy Team and Gnash will be on hand for additional festivities.

A pair of giveaways highlight the final weekend of the home schedule. On Friday, August 28th, the first 4,000 fans can take home the 2021 Magnet Schedule Giveaway presented by FOX 17 News. The penultimate home game of the 2020 season features the University of Tennessee Apron Giveaway to the first 2,000 fans presented by First Horizon on August 29th.

May 16th: Armed Forces Day
The Sounds pay tribute to all men and women of the armed forces while players wear special military jerseys. Each branch of the military will be recognized during special in-between inning celebrations. Military families can enjoy a $2.00 discount on single-game ticket prices by offering their government-issued military I.D. at the Sounds Ticket Office.

June 28th: Senior Day presented by Amerigroup
Sounds Fans 55 & older get their chance to run the bases postgame and can take advantage of a $2.00 discount on single-game tickets. Silver Sounds Club members receive complimentary admission to Senior Day and one lucky member will be selected to throw out the ceremonial first pitch of the game.


June 29th: Pride Night
The Nashville Sounds continue to support everybody at First Horizon Park. We celebrate the LGBTQ community by promoting acceptance and inclusion for all members of Middle Tennessee communities.

August 1st: Bachville Night
For a second time at First Horizon Park, fans can mix and mingle with contestants from ABC’s hit reality show “The Bachelor” and “The Bachelorette” in a special pregame Q&A session and cocktail hour.

August 14th: By One Vote: Tennessee Tips the Ballot
Fans are invited to participate in a special pregame event to commemorate the 100th anniversary of the ratification of the 19th amendment, learning about women’s suffrage and how baseball in Tennessee contributed to America’s history.

August 27th: Paradise at the Park
We celebrate the return of the Paradise Park, a Broadway favorite to many. Join the party at The Band Box and enjoy Paradise Park staples such as grilled cheese sandwiches, tater tots, corn dogs and Natural Light pitchers.

The complete list of weekly promotions for the 2020 season at First Horizon Park are listed below.

Kroger Plus Mondays (10 Dates)
Score a “Family 4-Pack” of Select section tickets, 4 hot dogs and 4 fountain sodas for just $44.00 when showing a Kroger Plus shopper’s card at the Sounds Ticket Office. Offer subject to availability. Phone and internet orders are not available for this promotion.

Tito’s Tail Waggin’ Tuesday (8)
2019’s most pup-ular promotion returns in 2020. Bring your favorite four-legged friend to the game on Tuesdays when First Horizon Park opens its doggie doors to Nashville’s pups and their masters. Tickets start at $25.00 ($20.00 for owners; $5.00 for dog) with all dog ticket proceeds from each Tuesday game benefitting a local nonprofit organization.


Winning Wednesday (7)
Returning for the second consecutive season is Winning Wednesday presented by Pepsi. Come on a Wednesday for your chance to win several different prizes, including a postgame trip around the bases (available to all fans) after a Sounds victory. Additionally, the first 1,000 fans on each Wednesday are guaranteed a free prize or offer via scratch-off.

FOX 17 News Friday Fireworks (11)
First is the action on the field and second is the FOX 17 News postgame fireworks show every Friday.

Hit City Saturdays (11)
The roar of the crowd at First Horizon Park gets loudest on Saturday. Make the ballpark the place to be in Nashville with entertainment options like Third and Home and The Band Box.

Seniors and Military families can enjoy a $2.00 discount on single-game ticket prices at First Horizon Park. The offer is valid for any reserved seat section – subject to availability. Offer valid for up to four (4) tickets per I.D. (Seniors 55 +, government-issued military I.D. required at ticket office; no phone orders).

The 2020 season begins on Thursday, April 9th when the Sounds host the Iowa Cubs at 6:35pm. 2020 season ticket memberships are on sale through the Nashville Sounds ticket office.