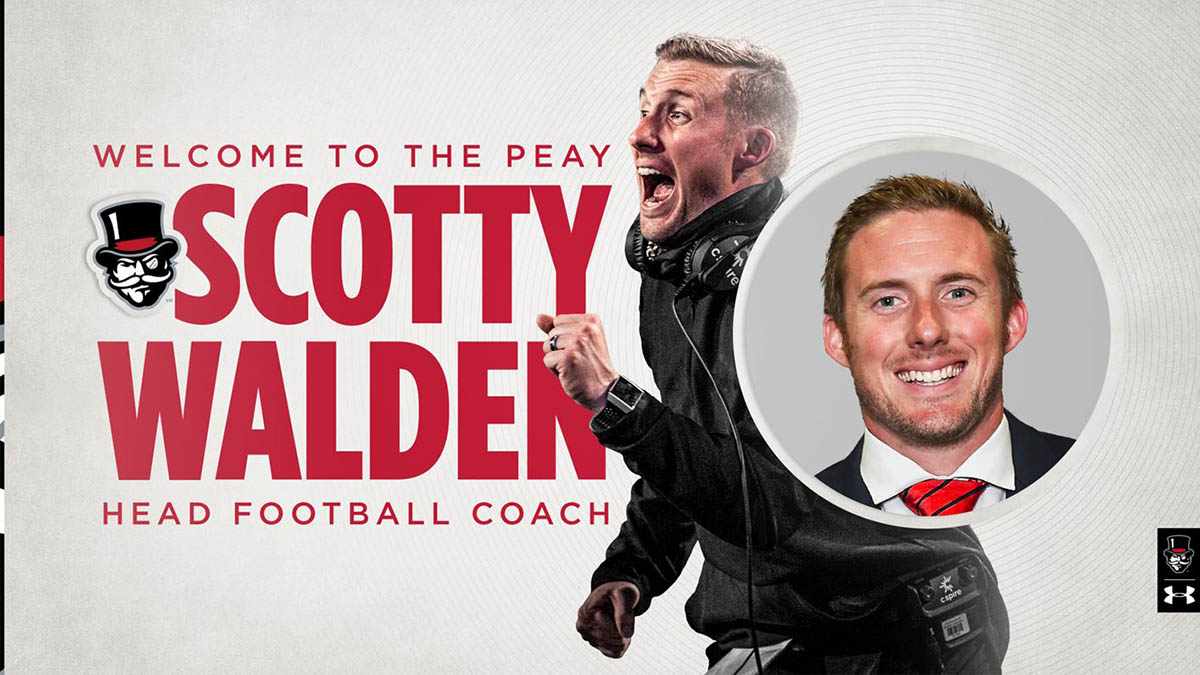 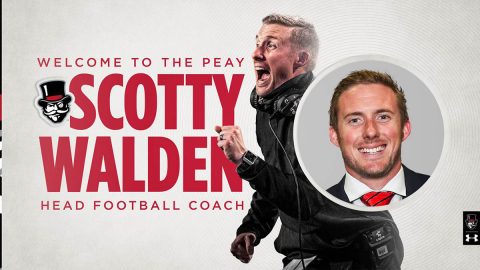 Austin Peay State University will welcome Walden to Clarksville during an introductory press conference at 1:30pm, Monday, November 2nd, 2020 at the Winfield Dunn Center in Clarksville. The event will be open to the public with university and athletics department guidelines regarding social distancing and masks in place and follow this release.

“Today, we welcome one of the most energetic and innovative young coaches in the country to lead our football team,” said Harrison. “In Coach Walden, we have found a man who is passionate about the student-athlete experience, energized about being part of the university and Clarksville-Montgomery County community, and excited to join us in our relentless pursuit of excellence.

“Scotty is a new-age CEO for a new era of college football. He is a tireless worker, a motivator, a dogged recruiter, and a person who possesses an infectious personality that will lead us back to the OVC Championship and beyond. I am thrilled to welcome Scotty, Callie, and Luca to the Austin Peay family, and I look forward to our opportunity to officially welcome them Monday.”

“Callie, Luca, and I are incredibly blessed and thankful to be a part of the Governor family,” said Walden. “Becoming the head football coach for an up-and-coming program like Austin Peay is a dream come true for myself and my family.

“I am looking forward to meeting the players and getting to work as soon as possible. We appreciate (Interim APSU President) Dannelle Whiteside, (Director of Athletics) Gerald Harrison and the entire Austin Peay community for the amazing opportunity and belief in us. Let’s go do something special together!”

Southern Miss hired Walden as a wide receivers coach in 2017 before elevating him to co-offensive coordinator before the 2019 season. Over four seasons in Hattiesburg, he coached two standout receivers: Quez Watkins, a sixth-round pick by the Philadelphia Eagles in the 2020 NFL Draft, and Allenzae Staggers. In addition, USM played in the 2017 Walk-On’s Independence Bowl and the 2019 Lockheed Martin Armed Forces Bowl during his tenure.


Considered one of the youngest and brightest offensive minds in collegiate football, the American Football Coaches Association tabbed Walden as a Top 35 coach under 35 years of age in 2019.

Prior to his move to Southern Miss, Walden was the head coach at East Texas Baptist during the 2016 season. Promoted following Joshua Eargle’s departure to join Austin Peay State University’s coaching staff as offensive line coach and run game coordinator, he was the youngest head coach at any NCAA school that season.

Before becoming ETBU’s head coach, Walden was its offensive coordinator for three seasons (2013-15), culminating in the Tigers’ winning a share of the 2015 American Southwest Conference championship. It was the program’s first title since 2003. His offense produced four All-ASC first-team selections, two of whom also received D3football.com All-Region awards, and two were USA Football Network All-American team picks.

In his three years as offensive coordinator at ETBU, Walden’s offense re-wrote the program’s record book for individual, single game, and season records while being nationally known for passing and scoring. In his time as an assistant, ETBU football student-athletes broke a combined 26 individual and team records.

Walden began his collegiate coaching career in spring 2012 while still an undergraduate at Sul Ross State. That fall, the Lobos named him their offensive coordinator, and in his rookie season, the SRSU offense led all of NCAA with 581.9 yards and 48.8 points per game. His offense produced two D3Football.com All-Americans and six All-ASC products. Sul Ross State broke 16 overall offensive school records, with two of them being most offensive yards in a game (800) and points in a game (75).

Due to his success as a rookie offensive coordinator, Walden coached the quarterbacks at the National Bowl Game in December 2012, which included a pair of Sul Ross State student-athletes. He has also coached at the Air It Out Passing Camp from 2009-2011.

An NCAA Division III product, Walden was the starting quarterback at Dordt College (2008) and Sul Ross State University (2011), sandwiching two seasons at Hardin-Simmons (2009-10). In his senior season (2011), he was the team captain and team Leadership award recipient. Walden was a two-time All-ASC academic winner and started his freshman season at Dordt College. During his two seasons at Hardin-Simmons (2009-10), he played as both a quarterback and defensive back.


Walden takes over the Governors football program from Marquase Lovings, who has served as interim head coach since July.

The introductory press conference will be open, free of charge, to the public, with fans requested to enter the following gates:

Seating is limited to the Dunn Center’s second floor, with fans required to maintain social distancing. All individuals in attendance must wear a mask upon entry and at all times while inside the facility. Austin Peay State University will make hand sanitizer available at specially marked locations inside the Dunn Center.

APSU Governors fans using wheelchairs will be seated on the first floor nearest Gate D and may not leave the designated area.