Clarksville, TN – While Austin Peay State University (APSU) head football coach Scotty Walden will be the primary offensive play-caller this spring, he will have a former assistant on the sidelines to help carry the load with Josh Cochran joining his staff as co-Offensive Coordinator and offensive line coach. 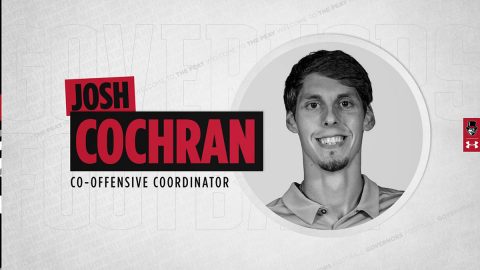 “Josh is one of the best up-and-coming offensive line coaches in college football,” said Walden. “Josh is a relentless coach and recruiter and has been around some great programs and coaches such as Matt Rhule and Mack Brown. He has great knowledge of our offensive system and how to attack defensive fronts.”

“Josh’s energy is infectious, and he will pour that energy into our offense on and off the field. I am beyond excited to have Josh as a part of our staff,” Walden stated.

“I could not be more excited and thankful for this opportunity to join Scotty and this staff at Austin Peay,” said Cochran. “This wonderful university has exceptional student-athletes that I am determined to help graduate off the field, win championships on the field, and grow into men of integrity for life after football.”

A three-year letterman (2011-13) on the offensive line at Texas, Cochran was a Yahoo! Sports Freshman All-American in 2011. He played in 31 career games with 23 starts before ending his career four games into the 2013 season due to a chronic shoulder injury. He was a 2012 First Team Academic All-Big 12 selection and a four-time member of the Big 12 Commissioner’s Honor Roll.

A former high school All-American, Cochran earned his bachelor’s degree in physical culture and sport from Texas in 2015. He completed a master’s degree in sport management at Baylor in 2019.