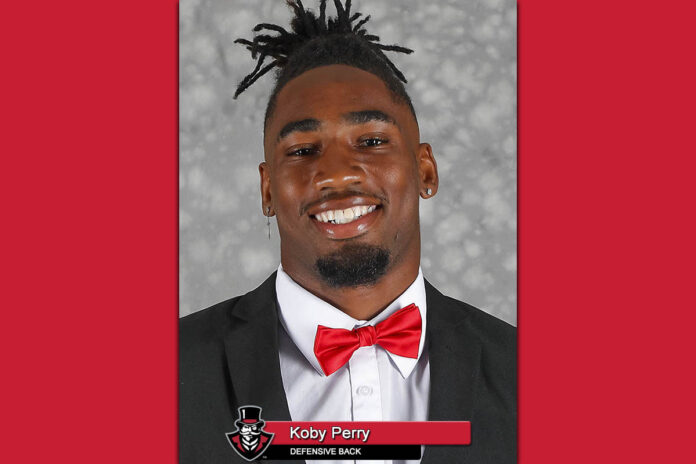 Brentwood, TN – For the first time in 43 years, an Austin Peay State University (APSU) football player has been named the Ohio Valley Conference Defensive Player of the Year, with Koby Perry taking home the award, the league announced Tuesday.

The Covington, Georgia native joins Mike Betts (1978) and Bob Bible (1977) as just the third Governor to ever be named the OVC Defensive Player of the Year. Perry, who also was a First Team All-OVC selection, led Austin Peay State University and ranked third in the OVC with 85 tackles (7.7. per game) and his 51 solo stops were the second-best mark in the league.

In conference action, Perry was even better, his 55 tackles (9.2 per game) and 30 solo tackles were ranked second in the OVC. Perry also racked up 8.0 tackles for loss – with 4.5 coming in OVC play – ranking eighth in the league in TFLs, but leading all defensive backs in stops behind the line of scrimmage.

Perry also recorded a 75-yard pick-six in the first quarter against the Skyhawks, adding a tackle for loss, pass breakup, and a quarterback hurry to earn his first-ever OVC Defensive Player of the Week award.  Perry would record an interception in his second-straight game the following week when he picked off an Eastern Illinois pass and returned in 28 yards.

The 6-0, 174-pound defensive back finished his OVC Defensive Player of the Year season with 85 tackles, eight tackles for loss, one sack, one forced fumble, two interceptions, three quarterback hurries, and three pass breakups.

Perry also is a Finalist for the STATS FCS Buck Buchannan Award, which is given annually to the top defensive player in the FCS. Kordell Jackson was the last Gov to be a Buck Buchannan Finalist, finishing 13th in the voting in 2020-21 and 6th in 2019.