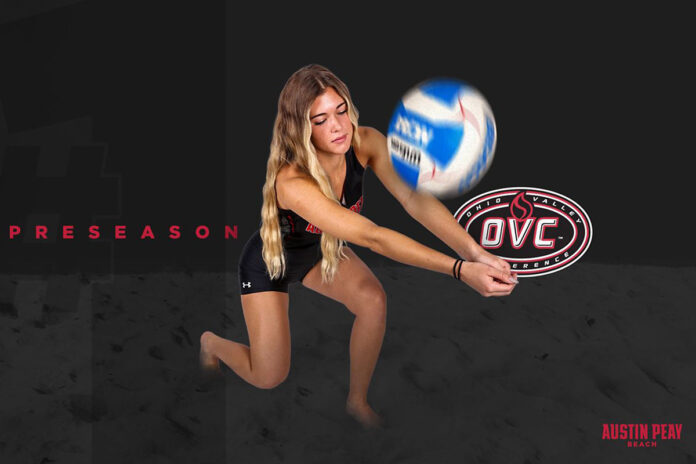 Last season, Bullington posted a 7-4 overall record while playing exclusively with Aysha Hood. The duo went 5-2 when playing as the Govs’ No. 1 duo and was a perfect 2-0 in the No. 2 spot. Bullington also went 2-1 in three decisions during Austin Peay State University’s OVC Tournament run.

In her sixth year leading the beach volleyball program, APSU head coach Taylor Mott‘s team features 10 returning letterwinners and four newcomers. Freshmen Jaida Clark and Elizabeth Wheat and transfer Mikayla Powell got their first action for the Governors during indoor volleyball season and they will be joined by Texas A&M Corpus Christi transfer Demi McInnis, who will make her Austin Peay debut during the beach season.

The Governors also return a pair of ten-match winners from a season ago in Caroline Waite and Erin Eisenhart. The Waite-Eisenhart duo went 10-5 last year, winning seven times in the No. 4 position and posting a 3-0 mark in the No. 5 spot.

Kelsey Mead and Tegan Seyring also are back on the sand for the APSU Govs after earning OVC Beach Volleyball All-Tournament team honors last season. Mead and Seyring scored the championship-clinching point when they beat the previously unbeaten UT Martin duo of Haeleigh Paulino and Logan Wallick in the No. 3 match.

APSU kicks off its sixth season of beach volleyball at the FAU Paradise Invitational, March 4-5, with matches against Palm Beach Atlantic, 7:00am, and Florida Atlantic, 1:00pm, on the first day of the event. The Govs then take on UNC Wilmington, 7:00am, and Florida Gulf Coast, 9:00am, on the second day to wrap up the season-opening event.