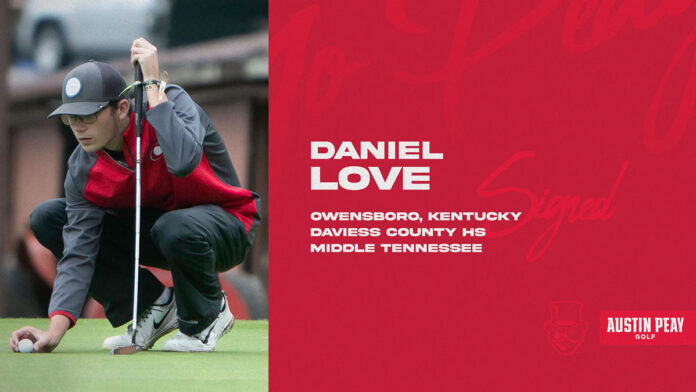 Love competed in all three fall events for Middle Tennessee during the 2020-21 season, turning in a 78.1 stroke average. The Owensboro, Kentucky native posted his first-career counting score in the third round of his collegiate debut, shooting a 79 at the 2020 Scenic City Collegiate at The Honors Course in Ooltewah Tennessee.

Love followed that up with the best round of his MTSU career, shooting a two-over 74 in the third round of the 2020 Graeme McDowell Invitational (9/30/2020) at Greystone Golf and Country Club in Birmingham, Alabama. Love wrapped up his first fall as a Blue Raider with a 75 and 76 at MTSU’s home event at The Grove in College Grove, Tennessee.

A Daviess County High School product, Love is a three-time Kentucky All-State honoree and a two-time Region 2 Player of the Year. Love holds the DCHS records for tournaments won (12) and stroke average (72.07) and won the 2018 Kentucky Junior Amateur Championship.

Love capped off his prep career by being named The Owensboro Times Boys’ Golf Player of the Year and capturing the individual region title while leading his team to the region title and another appearance in the state tournament.

Love, who did not play for the Blue Raiders during the 2021-22 season, is the second Middle Tennessee transfer to join Wilson’s roster with Logan Spurrier transferring to Austin  Peay State University prior to the spring portion of the 2021-22 season.