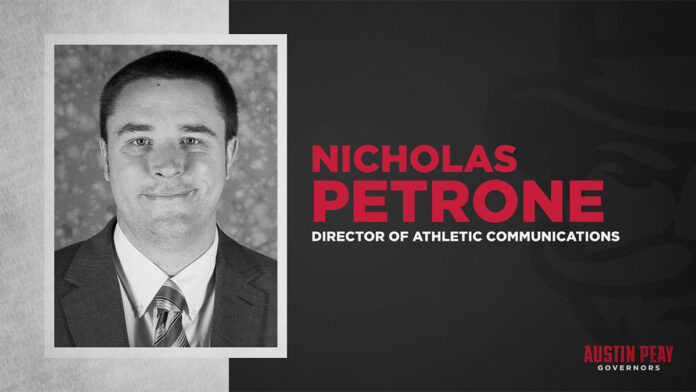 “I’m excited to have Nicholas joining our staff,” said Cody Bush, assistant director of athletics for strategic communications and brand advancement. “He brings a wealth of experience from all levels of college athletics and a wide-ranging understanding of the profession as a director that will prove invaluable as we continue to grow our coverage of Governors athletics on all of our platforms.”

While at Hendrix, Petrone oversaw coverage for the Warriors’ 23 varsity teams and two club programs. He oversaw the completion of internet access to all of Hendrix’s outdoor facilities to facilitate live broadcasts at those venues. That effort resulted in the first broadcasts of home tennis and swimming and diving competitions.

Prior to his time with at Hendrix, he was the sports information director at Stephens College in Columbia, Missouri for two seasons. Petrone also served as director at Thomas University, the University of the Pacific, Husson University, and Central Methodist University.

A 2007 graduate of Hanover with a bachelor’s degree in communication, Petrone began his career as an intern at Vanderbilt University where he was the primary contact for the Commodores’ cross-country teams. He then joined the staff at Mars Hill University as an assistant director, aiding in the coverage of all the Lions intercollegiate teams.

Petrone joined the Central Methodist University staff in 2012 as sports information director, leading the coverage for all the Eagles intercollegiate teams. Under his leadership, Central Methodist became the first institution nationwide at any level to live stream a football National Signing Day ceremony on campus for its recruits in 2015. He earned NAIA-SIDA awards for publications and website design while also aiding in coverage for six national championship events during his stay in Fayette, Missouri.

After a brief stop at Husson University, Petrone joined the staff at Jacksonville University in Florida as associate director of athletic media relations. He covered the Dolphins men’s basketball, women’s track and field team, and the men and women’s lacrosse programs. Petrone then joined the staff at the University of the Pacific for one season, followed by time at Thomas University and Stephens College.

Petrone was a four-year letter-winner for the Hanover (Ind.) College football team from 2003-06. The Panthers won a Heartland Collegiate Athletic Conference title in 2003 and advanced to the NCAA Division III National Championship.

Petrone, who is originally from Nashville, Tennessee, is a Father Ryan High School alumnus and has a son Leo.