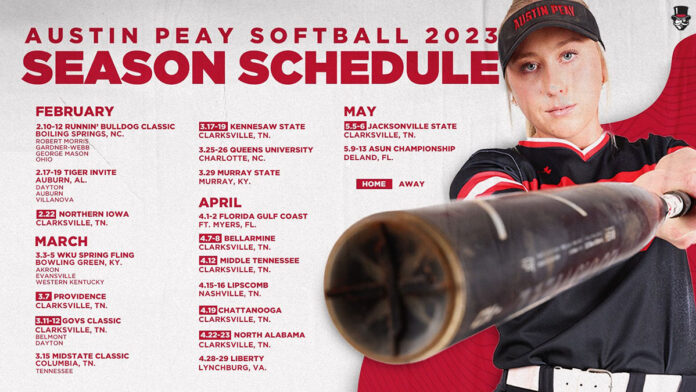 The Governors, who will be playing their first season as a member of the ASUN Conference, finished the 2022 season with a 30-23 record and return 14 letter winners along with four transfers and six true freshmen.

The Governors spend the season’s first two weekends on the road, beginning February 10-12 in Boiling Springs, North Carolina, at the Runnin’ Bulldog Classic – where APSU will take on Robert Morris, Ohio, and classic host Gardner-Webb.

The Governors will play eight three-game series in their first season as a member of the ASUN Conference, with four coming at home and four on the road.

Austin Peay State University will play seven-midweek contests during the 2023 season, with five coming at home, one on the road, and one being played at a neutral site.

The 2023 ASUN Conference Championship Tournament will take place in DeLand, Florida, May 9th-13th, with the top eight teams making the tournament field.

For information, or to buy tickets, for the Governors home softball games at Cathi Maynard Park-Cheryl Holt Field, go online to LetsGoPeay.com and click on the ticket tab near the top of the home page, or call the ticket office at 931.221.7329.