The FreeThinkers for Peace and Civil Liberties gathered at the Eternal Flame in downtown Clarksville Thursday evening to acknowledge the escalating number of US soldiers killed in Iraq. On Wednesday, the number of casualties in Iraq reached 3,504, including nearly 200 soldiers from Kentucky and Tennessee. 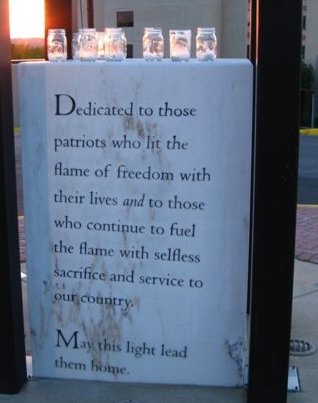 FreeThinkers founder Debbie Boen and co-organizer Christine Piesyk circled a tree with candles for a solemn, non-political memorial at which the names of the Kentucky and Tennessee soldiers were read. The group stood in silence to honor the fallen.

Boen voiced concern that Americans need to become more involved and vocal in their opposition to the war and the policies supporting it, to read about the issues and ask the hard questions.

“How many more have to die in this fight?” she asked, questioning the motivation behind the war.

Piesyk noted that the soldiers killed included men and women, people who are sons and fathers, mothers and daughters, sisters and brothers. One hundred and eleven soldiers have died from self-inflicted wounds. Coalition countries have sustained heavy losses and the Iraqi people have casualty numbers well over 50,000. (icasualties.org)

“Reading the names puts a face to the numbers in the news,” Piesyk said.  “It makes them real, even though we don’t know them. To someone out there, each name represents a broken heart.”

The FreeThinkers have held over fifty vigils at the Flame and have also sponsored other events including anti-war rallies and peace actions at various locations around Clarksville.