In the beginning there were the westerns, big sky country, John Ford and a young John Wayne. There were titles like The Searchers, Stagecoach, She Wore a Yellow Ribbon, Fort Apache. 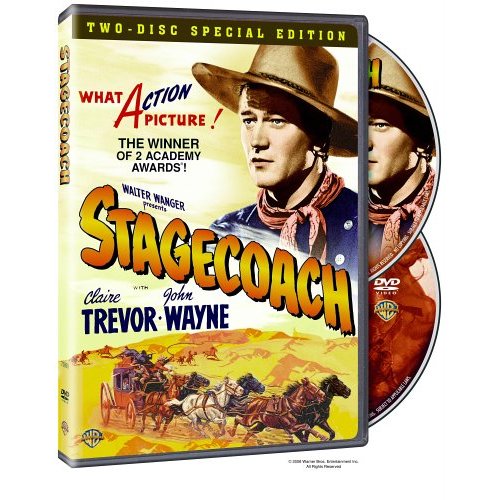 Stagecoach: (1939) This is early Wayne — all heroics, cowboys and Indians battling it out in the Southwestern plains. What should be a simple trip is made manic when Geronimo hits the warpath, and coach trying to run the range is people with a pregnant woman, a drunken doctor, a bandit and thieving bank manager.

She Wore A Yellow Ribbon: (1949) This is a required component of any true Wayne collection. He’s a retiring officer, faced with all the things that come with major life changes. It’s number three in a trilogy that began with Fort Apache and continued with Rio Grande.

Searchers: In 1956 Wayne broke ground in a story that confronted prejudice and interracial relationships. Wayne is Ethan Edwards, fresh from the Civil War. He hopes to settle down with a woman he loves, but instead finds himself searching for a niece kidnapped by Indians. As the search deepens, Edwards prejudice against Native Americans emerges, and he finds himself wishing his niece was dead — even by his own hand — rather that living with someone of another race.

True Grit: Tomboy Mattie Ross convinces curmudgeonly old marshall Rooster Cogburn to help her find justice in the case of her father’s death. Glen Camopbell has a supporting role as a Texas ranger also on the hunt for a killer. (1969)

The Cowboys: A tour de force with Wayne as an elderly cowboy challenged to train and herd a band of kids on a cattle drive. Wayne is gruff, a curmudgeon, driving his boys harder than the cattle, but earning their loyalty and trust as they become men.

Sands of Iwo Jima: (1950) Wayne does what he does best — barking orders and being the tough guy — as he plays Marine Sgt. John Strykker, bullying his troops through training for combat in the Pacific wasr zone. It is only as the bloody fighting at Iwo Joma occurs that his battered troops understand the rationale behind the their brutal training.

The Fighting Seabees: ( ) Wayne is a master builder constructing military sites in the South Pacific. But his work crews are unprotected, weaponless and under attack. He heads to washington where the Construction Battalions — fighting sebees — who both build and fight, changing the way things got done in that war zone.

Hellfighters: This 1968 action film has Wayne playing an oil well firefighter. It’s firefighting sequences are spectacular, and the film is tempered with several soap-opera like storylines.

McClintock: In 1963 Wayne paired with Maureen O’Hara (always a good combo) in this cattle ranching romp that has all the earmarks of a western Taming of the Shrew. Family fights, land wars and lots of cows in this lighter weight Wayne classic.

North to Alaska: Johnny Horton’s song North to Alaska opens the story of gold miners, a mail-order bride of sorts, friendship, trust, love and lust, with a lot of brawling thrown in for good measure. Fabian joins the melee as the love-struck baby brother. (1960)

Donovan’s Reef: Wayne’s last film (1963) with director John Ford is set a long way from the continental West — all the way to the South Pacific, when Wayne as Donovan playing opposite the perpetually innebriated Lee Marvin as a bar keeper. Enter a prissy Boston-bred lady and the brawls and the laughter only get longer and louder.

Drive-In Saturday Night is published every Friday (giving you time to buy or rent your movies and stock up on popcorn) through Labor Day. It honors the best and the worst of films that once upon a time graced drive-in theater screens as double and triple features. Enjoy!