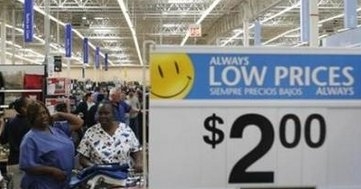 Tennessee offers a back-to-school tax-free shopping weekend every year, a benefit to families with students heading back to school. It’s happening this weekend, August 3-5. It’s a potential benefit to everyone including businesses who want a break on clothing, school or office supplies, and computers. The extent of items liberated from taxation have some restrictions, but the boon is not limited just to families with school age children. Small and large businesses benefit as well from the tax breaks, either as buyers or sellers of merchandise. Because everybody, not just parents of school age children or college students, can save. Seems like a good idea. But what is the reality?

Across the state, across Clarksville, shopping reached a frenzied peak as residents poured into stores seeking bargains with the added bonus of tax amnesty attached. All day Saturday I received phone calls from exhausted friends and neighbors who, having battled the mob scene at the regions box stores, were home again, exhausted, and not always satisfied with their experience. Oh yes, they saved money. But was it worth the aggravation?

If you have to make a big buy — a computer, a complete wardrobe, a year’s worth of school supplies, the savings might be worth it. Otherwise, the sales tax savings just aren’t worth the hassle of crowds, long lines, diminishing supply (unless you get there first and early), out-of-stock items, the overall rudeness of shoppers to each other and the harried overworked sales assistants trying to keep ahead of depleting shelves or check out the irritated, tired masses.

Add to that the external factors, the oppressive heat and humidity, the poor air quality (Saturday’s air quality was rated as dangerously unhealthy), the heat island effect of parking lots overflowing with hot metal cars and the stench of car exhaust and the result is anything but a pleasant experience.

I’ve done tax-free weekend shopping before. I have no desire to ever repeat the process again. The phone calls I received from friends affirmed that choice as they regaled me with horror stories of shoppers grabbing things from other hands and carts of other shoppers. I heard complaints of epidemic rudeness. I heard battlefield sagas of parking lot warfare as drivers aimed for a space in which to park. Parking lot rage was rampant.

My granddaughter, who will attend APSU in a few weeks, called; she and friend wanted to know if I would shop with them on Sunday afternoon, since I had already said I would buy her some new clothes for college. Honey, I said, we’ll go on Monday. As planned. And I’ll pay the additional tax for the privilege of stress-free shopping. And take her and her sister to lunch along the way.

I canm’t help but wonder if it would make more sense to have a monthly or quarterly sales tax-free event, or simply lower the sales tax bite permanently on some items (especially items used for education and training, which is how the current amnesty is marketed), and make them more affordable on a year-round basis. It’s something to consider, especially if we are supposed to be a pro-education community. Pro-education states put their money where their students are. Shouldn’t that include their ability to acquire supplies? Maybe, too, the clothing wars would be less volatile if standardized clothing (not necessarily the formal uniforms or yesteryear, but, perhaps, a variation on Chinos that don’t hang down around one’s knees, neat shirts or T’s were in place). I can’t see people racing into Wal-Mart or K-Mart or Governor’s Square Mall and yanking classic tan or navy Chinos from someone else’s hands.

I don’t claim to have the answers, and retailers are probably delighted with the profit margins (though not with the condition of their stores after the fact). Hordes of stampeding shoppers are not known for neatness. Of course, stores get their profit surge, which more than makes up for the low wages most of their now beleaguered and exhausted employees get.

For me, armed with prior tax amnesty experience, tax free weekend has long since become an exercise in fatigue and frustration, augmented by a plague of bad manners from the public at large.

I think I’d rather pay the tax. And shop peacefully.