Since 2000, more issues than answers arise in e-voting’s short history 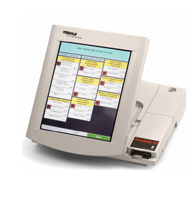 In the wake of 2000 election issues, Congress passed the Help America Vote Act (HAVA) in 2002. HAVA was intended to address the problems of accuracy and functionality such as “hanging chads”– of the voting systems then in use. HAVA’s mandate also included ensuring that all voters with disabilities have access to voting systems that would provide private and independent voting.

These changes were required in every state for the 2006 federal election. Millions of tax dollars were allocated and dispersed to the states to upgrade and buy new equipment that would incorporate these requirements.

Direct Recording Electronic (DRE) voting machines are touch screen machines with no paper ballot. In Tennessee manufacturers of electronic voting systems including Diebold (a Diebold Voting Machine is shown above right), ES&S, Hart, and Microvote, eagerly marketed their Direct Recording Electronic machines to county election officials, although most of these manufacturers also produce optical scan voting systems. Optical scan systems are less costly, more efficient, and most importantly use paper ballots, marked by each voter, then optically scanned to record and count the vote.

DREs are essentially notebook computers programmed to display ballot images, record and count voter choices, and store this information on removable memory cards. Like any computer, the DREs can get a virus, be incorrectly programmed, or malfunction, either through innocent mishap or malicious intent. It is important to remember that when problems occur with the DREs, there is no independent record of each vote, so no meaningful recount or audit is possible.

Thousands of problems with electronic voting systems have arisen in dozens of states, including votes “flipped”, votes not counted, and malfunctioning memory cards. While most problems have been machine malfunctions from programming errors or poll worker inexperience, some less savory problems have occurred, including in 2006 in Memphis, where evidence revealed tampering had occurred in the central vote tabulator. It is clear that DREs are vulnerable to errors, malfunctions and tampering. As a result, it’s impossible to safeguard votes on such equipment.

In early 2005, I organized Save Our Democracy, a grassroots group that has continuously learned about voting issues and equipment. In 2006 SOD formed a coalition with Common Cause TN. The group’s members have also worked with county and state election commissions, legislators, the state coordinator of elections and other citizen groups to encourage county commissions to purchase optical scan voting systems, NOT DRE’s.

The current reality in the US and Tennessee

In 35 states, all votes are cast on voter verifiable paper ballots. Only five states still use DREs exclusively. Tennessee lags behind, with only two counties safeguarding their elections. We must have legislation that mandates paper ballots.

What’s the answer? The simple fix is making sure all voters vote on electronic voting systems that start with a paper ballot that they mark. Throw out the DREs and replace them with optical scan voting systems. Election officials will tell us there is not time to switch to optical scan machines before the November 2008 election. In 2006,however, the counties ordered and installed completely new equipment in seven months, so there is time to make the change to optical scan systems by November.

What’s happening in the Tennessee Legislature?

In 2005, Rep. Susan Lynn and Sen. Bill Bryson introduced the first bill to mandate paper ballots. In the 2006 legislative session, we worked closely with Rep. Gary Moore and Senator Joe Haynes to craft a comprehensive bill, The Voter Confidence Act that would mandate paper ballots, post election audits, and high level security for the voting systems. After the 2006 election, legislators began to appreciate the problems with the DREs: 12 bills were introduced in 2007 that would increase voter security. All of these bills, including The Voter Confidence Act SB 1363 HB 1256, are currently being reviewed by a joint Senate-House Study Committee that will report its recommendations to the General Assembly by Feb. 2008. The next meeting will be Dec. 18.

A second examination revealing the flaws and dangers of electronic voting issues is also underway. The TN Advisory Commission on Intergovernmental Relations -TACIR – is conducting a sweeping examination of voting and election issues. Their two interim reports, written by the staff and issued in June and September, 2007, urge the state to move to optical scan voting systems as soon as possible.

Sign up at www.votesafetn.org to receive our email alerts.

Reprinted from Gathering to Save Our Democracy (11.12.07)

Bernie Ellis
Bernard "Bernie" H. Ellis, Jr., MA, MPH, is the principal researcher and founder of Bernard Ellis and Associates, Inc. Mr. Ellis is a consultant epidemiologist specializing in epidemiological research strategies to assess public health program development, delivery and effectiveness. Mr. Ellis is also a political and e-voting activist. He has devoted much of his professional life to helping others.
RELATED ARTICLES
News