Downtown Clarksville will be overflowing with artistic activity on May 1st for the First Thursday Artwalk. The Downtown Artists Co-Op will kick off the festivities with a reception for Claudia Balthrop’s one person show in the DAC gallery at 96 Franklin St. from 5-8 p.m today. It is free and open to the public. The show will run through May 28th with Claudia presenting her Gallery Talk to the public from 6-8 p.m. on May 15th.

Claudia is an amazing water colorist with local, regional and national recognition. She has a degree in Art Education and taught art in public schools for 18 years. She continued her art education with post graduate work at the University of Tenn; Arrowmont School of Arts and Crafts; Savanna College of Art and Design; and numerous workshops by well-known artists. She was vice president of the board of directors of the Oak Ridge Museum of Art, served as chairperson for education and as a jurist for numerous art shows.

Claudia will be exhibiting more than 30 pieces of her art, some of which are award winning pieces and many that are new and will be shown for the first time. The pieces will represent many phases of Claudia’s work from experimental methods and materials to representational paintings exhibiting a high degree of technical skill. Claudia and her husband were displaced from Mississippi by Hurricane Katrina and ended up back in Tennessee, and then more specifically, Clarksville. Mississippi’s loss was our gain and this is a show that you will want to chalk up on your calendar as a definite “must see.” 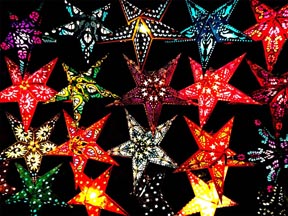 Continuing on up Franklin Street for the First Thursday, Carl Wilson {Universal Stars, at left) will be hanging a new photography show at Benne’s Steakhouse and Piano Bar. Carl has been doing photography for more than 40-years. Like many of us, Carl started with a box camera when he was a child and graduated to 35mm cameras when he settled into a military career with a steady income.

Carl’s evolution in photography is much like my own and many others who were just beginning to get interested in cameras in the ’60s. Start with a box camera; discover view-finder 35mm cameras; discover SLR 35mm cameras before they had light meters built in; move on to more advanced equipment and built-in light meters as the technology developed; and finally, the 21st Century and the digital camera age.

Carl said that digital cameras and computer processing have finally given him the freedom and flexibility to really see progress and development of his skills as a photographer. Since he is no longer tethered to film and a darkroom he can experiment and instantly see his mistakes and successes. It has made the learning curve much more pleasant. Now he can process his images on the computer and utilize the same skills he learned in the darkroom to get better quality images. I couldn’t agree with him more. Carl’s exhibit of photographs will be at Benne’s Steakhouse and Piano Bar until the end of May.

Kim Balevre, a senior art student at APSU, will exhibit her photography at Posh on Franklin St. Kim is an excellent photographer and has previously exhibited walk for First Thursday. Kim said that her favorite image in her Posh exhibit is one the did in London. She described her experience with this image as very unusual in that she actually got a perfectly clear day for the shot. A clear day in London? It must have made an impression on her because she described her memory of the details of the buildings and even the look of the blue sky as she clicked the shutter. Her photos include both color and black/white work.

Heidi Hopkins and Cliff Whittaker will share an exhibit at the new frame shop gallery in Paige King’s Hodgepodge on Franklin St. Heidi will have 7 or 8 of her favorite photographic images on exhibit, a mix of black and white and color. Most will be images she made with film and a couple will be digital. Her favorite is one she made in Germany of a chrome motorcycle exhaust with a nude woman on it. The chrome picks up all the tones of the scale and as you look at it you suddenly discover that it has a nude on it. Heidi got her first camera for Christmas in 1996. She immediately enrolled in a photography course at APSU and has since completed two years of extended education photography classes with an emphasis on darkroom techniques. Heidi’s pictures were awarded a first place, second place and an honorable mention in the All Army show which was her first venture into exhibiting her work. 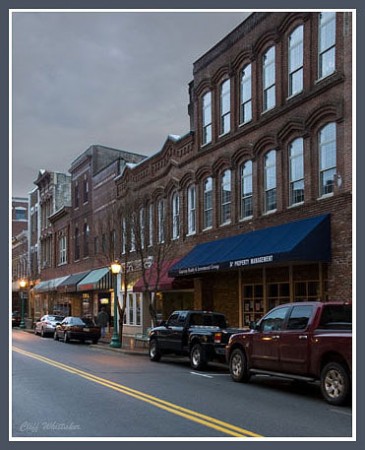 Cliff Whittaker has been involved with photography for more than 45 years. His progression through camera technology was much like that of Carl Wilson but with the addition of medium format cameras and then several years with a 4×5 view camera. Cliff is now 100% digital SLR and says that the image quality from the new technology surpasses the medium format film images from not many years back. Cliff will be exhibiting black and white photographs that have won awards in local and state exhibits and he will have his newest 20×16 color photograph which he calls Twilight on Franklin St.

Cliff says that all the years with film cameras and all the darkroom experience give him an advantage with new technology. Even though his Nikon D300 could be used in completely automatic mode Cliff prefers to use the manual settings when he is doing serious work. He says he feels that he is better qualified than a machine to make decisions about the focus and exposure of his images. Maybe he is just a control freak, but they say he does turn out some nice images.