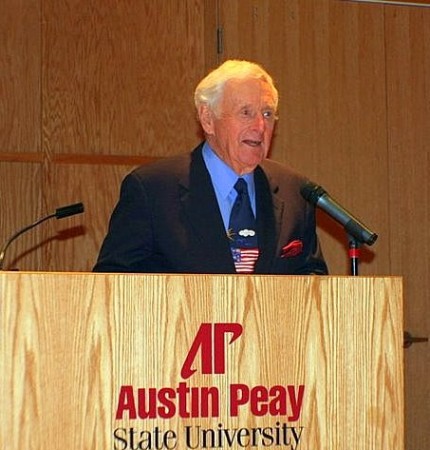 The 24th annual Ohio Valley History Conference continued on a high note with the banquet dinner on Friday night, October 30th. The keynote address was given by John Seigenthaler Sr. in the Morgan University Center Ballroom. Seigenthaler shared his remembrances of Bobby Kennedy and the Kennedy Presidential era in his address, “Conversations with Bobby Forty Years Later.”

Among his many remembrances, he recounted the young attorney general’s zeal in pursuing union corruption and the tumultuous tension of the Civil Rights struggles, particularly in Alabama and Mississippi; the Selma Bus Boycott, and the lead-up to the March on Washington. When U.S. Attorney General Robert Kennedy agreed to speak at the Law School of the University of Georgia, following their confrontational desegregation battle the year before, the university administration did not want him to meet with either of the two Black students that had been admitted in its desegregation battle. However Bobby did precisely that and met with Sharlene Hunter Galt. 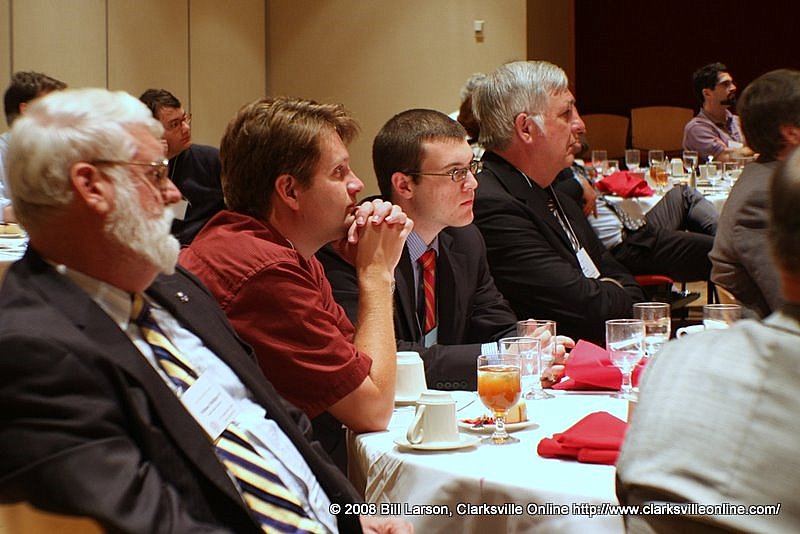 In another anecdote, Seigenthaler spoke of the relationship between Bobby Kennedy and Vice President Lyndon Baines Johnson. Theirs was a strained relationship at best however, the story of how Sarah Hughes came to be appointed to federal bench showed how prophetic fate’s hand came play. Vice President Johnson interceded on behalf of Sam Rayburn and asked Attorney General Robert Kennedy to appoint Sarah Hughes to the federal bench. Apparently, Bobby was not disposed towards her appointment but relented at the vice president’s request. Later, Judge Hughes would administer the oath of office to Johnson following the assassination of President John F. Kennedy in Dallas, Texas. Seigenthaler also shared the surprising desire of Robert Kennedy to serve as vice-president under Lyndon Johnson, had he sought a second term as president and the disappointment he felt when Johnson announced his decision not to pursue a second term. At the conclusion of his presentation, Professor Uffleman presented Mr. Seigenthaler with both, an OVHC conference T-shirt and a personalized framed conference poster.

The conference dinner also served as the official recognition of Dr. Richard P. Gildrie’s retirement, after a 38 year career in history. Dr. Glidrie now joins the ranks of professor emeritus status at Austin Peay State University. He will concentrate on continuing research and writing, along with his other pursuits.

The conference’s smooth flow can be attributed to the many hours of organizing detail performed by Assistant Professor Minoa Uffleman who coordinated this year’s event. David Nelson, also shared in the conference’s coordination and set-up. He served as the logistics director, including designing the conference’s website. It was announced that the Phi Alpha Theta Conference would be held in Spring 2009, which, Professor Uffleman is also coordinating as well. The 2009 Ohio Valley History Conference will be held on October 1-3, in Richmond, Kentucky hosted by Eastern Kentucky State University.

As the luncheon speaker, Michael Betrand, Tennessee State University, gave his presentation, “‘ This Ain’ t No Vaudeville: Popular Music, The Civil Rights Struggle and the 1956 Assault on Nat ‘King’ Cole'” Among the highlights, the Post-War transformation of the popular music scene heralded an unraveling of the Southern segregationist attitudes of Blacks in the society. They wee concerned for the unshackling of the segregationist view of culture, with white supremacy firmly proclaimed, being underminded by white youth’s gleeful acceptance of music by Black performers and their musical style. Segregationists were mortified by Elvis Aron Presley, a white boy acting like a Black man, exciting white youth and demeaning the white race. The 1956 assault on Nat ‘King’ Cole before an all-white Birmingham, Alabama audience spotlighted the segregationists intolerance and resentment of the changing social attitudes about Blacks position in society and their elevation to esteemed roles in entertainment. While newspapers bemoaned the assault on Mr. Cole as an isolated act, not one audience member moved to prevent nor stop the attack. None came to his defense. Along with this time, the Rev. Martin Luther King Jr. was just starting his campaign for civil rights and equality in the South and staging demonstrations that culminated in his repeated arrest. These demands for social, judicial and economic change were a direct affront to the South’s segregationist mindset of an orderly society.

In Panel 42, “Kentucky: Southern Identity and Interracial Challenges,” presentations focused on the unique character of Kentucky allegiance to its Union leanings and Southern regional connections. In “So Goes Democracy in a Democratic State,” Patrick Lewis, University of Kentucky, examined Racial Violence and White Discomfort with Black Participation in Political Power. Starting with the disillusionment of Kentucky unionists by Lincoln’s Emancipation of slaves and its dooming of slavery, he reviewed the state’s unique take on having a foot in both houses of the conflict. Kentucky never became Pro-Confederacy so much as it became more so Anti-Republican. This anti-republican bent found virulent expression through the Kentucky National Legion. The KNL was the official state agency empowered to thwart Black liberation. Republicans were out of favor because of President Lincoln’s emancipation maneuver and the Democratic Party governments that came to power did little to abate or curtail the deadly actions of the Klu Klux Klan and its efforts to protect white supremacy.

1870 marked the prospect of Black men being able to vote in elections. Whipping up fears of racial retaliation by the freed Blacks, Democrats quickly denounced the advance of Black enfranchisement in Kentucky. The Kentucky National Legion used violence to suppress the Black vote, and since the newly freed Blacks supported the Republican Party, the violence also suppressed the Republican Party.

The election of 1873 saw the eventual relegation of the Kentucky National Legion to oblivion with the imposition of the cursed poll tax. This was a new means to suppress Black voters and protect white supremacy.

“The Interracial Work of the Young Women’s Christain Association in Kentucky,” examined the nature of the racial prejudices and jealousies that operated in Kentucky in the establishment of YWCA in the late 1800’s and early 1900s. Presented by Althea Webb, Berea College, the presentation traced the start of the YWCA as a prayer group of women in England. It grew into an organization of women organized to improve conditions of women. It spread across Europe and in 1879 White women in Louisville formed a chapter. Their focus was on doing good works among the poor and less fortunate of the community. They concentrated on the newly arrived immigrant communities, focusing on speeding their assimilation into American culture. They conducted English language classes, taught the immigrants about hygiene and sanitation, housekeeping skills and citizenship.

In 1881, Black women of Louisville formed their separate YWCA chapter. The two racial groups did not mix or intermingle their activities. The Black women were all from the Black Middle Class of Louisville, consisting of teachers, doctors’ and ministers wives. These women conducted their self improvement activities within their own Black community. Their focus was educational advancement, learning foreign languages, advanced math, philosophy, as well as civics and they also conducted what amounted to a charm school.

These women received no administrative support for start-up from the national headquarters. They had to secure a building and handle their own funds in accordance with the organization’s standards. They did this in Louisville’s segregated atmosphere which limited Black property ownership to Black sections of town which were often less than desirable parts of town. Their programs proved more popular and successful than the White YWCA. This led to the White YWCA complaining to the national YWCA headquarters in New York. Their reply was for the two chapters to form a supervisory-affiliate relationship. The White YWCA did not want to associate with the Black YWCA but they were intimidated and felt shamed by the popularity and success of Black women’s efforts.

The New York headquarters did not appreciate the racial undertones of the complaints and thus was slow to effectively recognize the true cause of the unrest and implement a remedy. One such step was for all Black YWCA chapters to change their names to Alice Weakly YWCA chapters and follow a separate chain of authority which was itself supervised by the White YWCA authority. Advances in social consciousness and racial political empowerment doomed this gerrymandered quasi-servitude apparatus to eventual collapse. By the late 1950s, most of the Alice Weakley chapters had closed.