John Guider’s “The River Inside” /Out 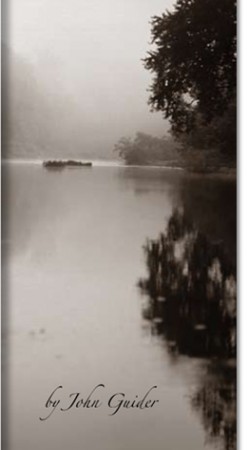 “The River Inside — Narrative and Photography” is the intriguing title of John Guider’s new book, which is sure to be deemed a masterpiece by all who dive into its many-nuanced depths.  Even those of us who encounter his work in serendipitous samples can, in my experience, be profoundly affected by the universal aspects of Guider’s views of the world.

I was first introduced to this Renaissance man’s extraordinary journey from near the Narrows of the Harpeth to New Orleans – in a canoe – while I was “killing time” in the Nashville airport.  Reading Joe Nolan’s feature of Guider in Nashville Arts Magazine revitalized my long-held preference to make time rather than kill it.  I remain so impressed with that article from October 2006, that it’s held a prominent place in my room and I’ve re-read it several times for inspiration!

Again, on November 19, I was “killing time” waiting for my fellow “local enthusiast” to meet me at the Tennessee State Museum.  It felt utterly serendipitous when I gazed up at a glorious shot of a canoe and sunburst clouds reflecting on the Mississippi River with this exciting announcement:  The River Inside: John Guilder’s Amazing Journey: October 3 through November 30.

Despite the show’s end being so imminent and Nashville being approximately a 50 mile drive from here, I’m compelled to recommend this brilliant exhibit for many reasons, including:

1.  The clarity of Guider’s photographs is awe-inspiring in itself.  As explained in Nolan’s article, Guider utilizes a unique platinum process rather than the more common use of silver as a light-sensitizing agent in traditional black/white photography.  The difference must be as striking as HDTV versus “rabbit ears” because the gradations of contrast allow for 100 shades of grey between black and white compared to only 10 with silver!

2.  The “human spirit” is unified in so many examples from aptly-named Guider’s river experience. He used so many words implying trepidation – “daunting,” “untenable,” “unexpected” – yet he not only completed that first vision, but returned to explore even more of the Mississippi!  All this after enduring a lifetime of respiratory ailments, including asthma, recurrent bouts of pneumonia and bronchitis and allergies so severe that he remained hospitalized for over a year at age 8.  That isolation from his family helped him realize that he could become accustomed to so much time alone, which paradoxically leads to the third and most important reason to see this show.

3.  It expresses the universal power of love.  Guider met his wife Mona Lisa after formulating his dream journey for many months, so he was initially reluctant to broach the subject to the love of his life. In Nolan’s article, he graciously credited her with being “. . . really good about it . . . I had never been in a relationship . . . where I was given that autonomy to be who I am.”  Guider echoes that sentiment in his book while acknowledging countless souls who contributed to his “amazing journey.”  “In part, I set out on this adventure to find myself.  In the end, I found something better:  community.”  That sense of community has been extended to the very young by the Tennessee State Museum with a newspaper insert called “Student Supplement” that’s also free.  Bonus displays include a short film, maps, shells, rocks and the estimated 600 pounds of supplies and photographic equipment filling the entire 16 ½ foot-Kevlar canoe, leaving just enough room for one intrepid man of great human spirit.

“The River Inside” is presented in part by Ingram Barge Co. of Nashville.  Located at 5th and Deaderick Streets in Nashville, the Tennessee Museum is open 10:00 a.m. – 5:00 p.m., Tuesday through Saturday and 1:00 p.m. – 5:00 p.m. on Sunday and is free to the public.  It is closed on Thanksgiving.  The museum website is www.tnmuseum.org

Kitty Madden
About the Author: Kitty Madden is a Reiki Master, APSU graduate, a veteran who still marvels at her good conduct medal from Ft. Campbell, a Friend of Dunbar Cave and a local enthusiast of the arts and nature. She deliberately chose to make Clarksville home based on a love for the diversity here, especially in nature, as found at Dunbar Cave, Rotary Park and along the two rivers and many creeks and lakes in our area.
RELATED ARTICLES
Arts/Leisure