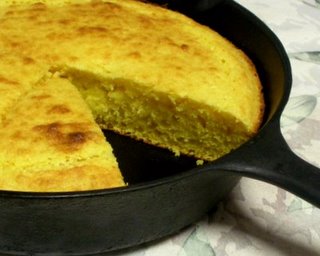 November 5th, 2005, my beloved and I were married. Shortly there after, this occurred:

It was a cool November night and rain was just starting to tap on the tin roof of our one room log cabin newlywed nest. Beloved would be returning from work in Nashville soon and being the new bride that I was wanted to surprise him with homemade fried chicken and mashed potatoes. I thawed the chicken, started the mashed potatoes and began to warm up my cast iron skillet on the stove. I poured about an inch of Vegetable oil into the skillet to begin frying my chicken. While that was heating, I sliced my chicken breasts into large individual pieces and began coating them with flour. Everything was going smoothly; it all smelled so good and only 30 minutes to go before Beloved arrived home! 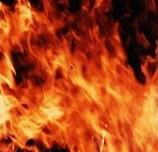 With all the busy-ness of the preparations I failed to notice that the oil in my skillet had become extremely hot and tiny little flames began to pop up all around the inside of the skillet. Frantically I looked around my kitchen for a lid or a towel or something to smother the flame; my eyes fell upon the bag of flour when I remembered Beloved’s advice once while in the kitchen to never throw flour on a kitchen fire. My next thought was the sink:

“I would just turn water on it!” I thought.

Too bad the sink was overflowing already with dirty dishes and no room for a flaming cast iron skillet.

Since the flames were still small I thought that a little rain would do just the trick, but once cold air hit my skillet the flames grew even higher!. Cars that were beginning to pass by our cabin started to pull over to observe this crazy woman on her porch with a ball of fire balancing on a skillet! Now, out of desperation, I realized that I needed to get rid of this skillet! I began to walk out into the yard, arm extended, skillet ablaze, and an audience of curious neighbors. So there I am standing in the middle of my yard in the pouring rain, looking around for options. “There’s my garden hose, hmmm…that might splatter it, I should take it away from my car and the house…maybe out here toward the gravel driveway? I can’t sit it down because the flames are too high.

Then I saw It. A giant puddle had formed in the low spot in our driveway. “That’s what I”ll do!” I thought, “I’ll just toss the oil into the puddle, problem solved.”(Some of you reading this are already foreseeing what’s about to happen)

I slowly walked toward the puddle when grease began splashing out the sides of the skillet leaving a small fire trail behind me.

I finally reached the puddle and with one quick movement I slung the hot grease toward the puddle of water.

POOF! A giant 3 foot by 4 foot circle of fire burst up toward the sky. The heat on my face was frightening and I did a brief check for hair and eyebrows. Still there.

Anger and embarrassment toward the large crowd that had now formed along the side of the road and in our driveway to share this moment with me, overtook me and I waved my skillet at them to motion for them to leave, that one act caused the remaining hot oil in the skillet to mix with oxygen producing a grand finale, a thin wall of fire around me.

I tossed my skillet out into the yard, walked into my cabin slamming the screen door behind me. I dumped the mash potatoes in the trash, and called in a large pizza for supper.

I went back outside later to make amends with my cast iron skillet who has now become my best friend in the kitchen.

Here’s something else you can do with your cast iron skillet:

Preheat the oven to 350 degrees. Pour the oil in an iron skillet. Heat the skillet in the oven. In a medium bowl mix the cornmeal,eggs and buttermilk. Remove the hot skillet from the oven. Increase the temperature to 400 degrees. pour a little of the hot oil into the batter and stir. Pour the batter into the skillet. Bake for 15-20 min. or until golden and crispy.

Serve hot with lots of butter~

Beth Britton" class="tdb-author-url">http://
Beth Britton is a stay-at-home mom and freelance writer .She has been a contributing author with Clarksville Online since 2008.
RELATED ARTICLES
News