The Clarksville Parks and Rec report

Jammin’ in the  Alley

It’s that time again! Clarksville will be Jammin’ in the Alley again this weekend, Strawberry Alley that is.

This month’s free concert features the Tim Lynch Band. Tim is a local favorite in Clarksville, playing a variety of venues around the city. He will be sure to entertain the crowd with his blend of blues, rock and country music.

Downtown restaurants will also offer outdoor dining to Jammin’ in the Alley attendants. The concert begins at 6p.m., but you may want to come early and claim your spot as we expect a large crowd this Friday night. Come ready to eat, dance and have fun!

The Downtown Market opened two weeks ago with great success. Thank you to all the vendors and patrons who have come to participate in Downtown Clarksville’s newest attraction.

This coming weekend the Downtown Market will celebrate dads. Stop by to pick up a gift for Father’s Day or stay and make Dad a homemade photo frame and/or paperweight with members of Clarksville’s Arts and Heritage Development Council.

Other items being offered by vendors this week include homemade jewelry, potted plants, home d’cor, produce, baked goods and more. The Downtown Market will take place every Saturday through October 24 from 8 a.m.-1 p.m. We hope to see you again this Saturday!

Young athletes participated in the local Hershey Track and Field competition this spring. First and second place winners moved on to compete in the District Competition. Winners at this competition were given the opportunity to advance to the state competition on June 20.

Good luck to all the participants. We are very proud that you will be representing the City of Clarksville!

Over the next two years, the current Fairgrounds Park will be completely transformed. The new park will include a marina, ball fields and new recreational facilities.

To make way for construction, the Fairgrounds Park will close to the public tomorrow. Groundbreaking on the new marina and redeveloped fairgrounds is set to begin in July. 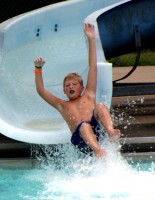 Don’t forget! Pool passes to all five of the city’s pools are still on sale at the Clarksville Parks and Recreation Office. If you have not already purchased your summer passes, now is the time to do so. For more details on pools and pool passes visit www.cityofclarksville.com/parksandrec or call the office at 645-7476.

Parks and Recreationhttp://www.cityofclarksville.com/parks%26rec/
The Clarksville Parks and Rec Report and Parks Department press releases is written by Candice Tillman,  the Supervisor of Marketing & Public Relations for the City of Clarksville Department of Parks & Recreation.
RELATED ARTICLES
Arts/Leisure