HomeBusinessSome Black Friday mayhem at the Toys R Us in Clarksville, TN
Business

Some Black Friday mayhem at the Toys R Us in Clarksville, TN

Toys R Us opened at midnight to get an early start on the Black Friday sales marathon. Being the only retail store open at that time of the night, they naturally drew quite a crowd. Over 300 people waited for their early opening by various accounts.

When the doors opened the crowd began a mass push for the door. This resulted in at least one person being trampled at the entrance to the store. The victim was taken by ambulance once removed from the area to Gateway Hospital for treatment of her injuries.

Six Clarksville PD units were dispatched, and according to the sister of the victim were needed to get the unruly crowd back under control. 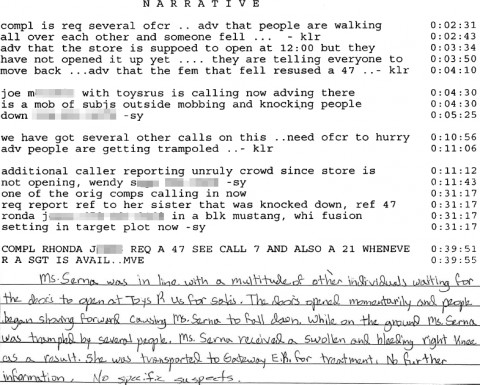 There was no extra security on hand to help keep things in order. Something retailers expecting large crowds to turn out, should have learned as a result of the Wal-Mart trampling death from last year.

The Clarksville Police Department confirmed the incident, and reports that they took a simple assault report on the incident.

We contacted Toys R Us for comment,  but as of the publication time they had not responded.

There were approximately 200 people standing in line at Best Buy, another 200 waiting to get in Old Navy at Governor’s Square Mall. Other mall area stores ranged from 6 to 20 people waiting in line. Electronics seemed to be the biggest draw, with clothing a close second. The earliest arrival time was at 3:30pm. But the average time for the first person to arrive at a location was about 7:30pm.

Editor’s Note: A correction was made on the mode of transport, and which hospital hospital. 911 log and police report description added.