Clarksville, TN – Austin Peay State University men’s golf climbed six spots to finish tied for fourth at the F&M Bank APSU Intercollegiate, improving each round and closing a with a final-round 279.

Jacksonville State took home team honors with a three-round 822, followed by Bowling Green at 831, Oakland at 840 and APSU, UT Martin and Troy all t-4th at 847.

An even-par 288 in the opening round put the Govs in an early hole, which they steadily improved upon throughout the tournament. They were eight shots better (280) in the second round and closed out with a 279 on what was the most difficult day, weather-wise. That improvement allowed Austin Peay to pass six of the nine Ohio Valley Conference teams, trailing only JSU and tying UT Martin.

“We played a lot better today,” Govs head coach Kirk Kayden said. “I thought the conditions were tougher, but we had the third best score of the day. It was a good finish to the fall season. Hopefully we can carry that over into the second season.” 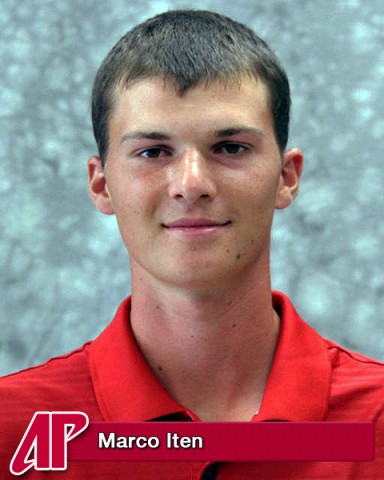 Balance was the key for the Govs, who finished fourth as a team, but did not have an individual inside the top 10. Freshman Marco Iten was the Govs top finisher, t-12th  with a 208, while freshman Anthony Bradley was two shots behind him with 210 to end up t-14th.  Govs seniors Luke Sherrod (t-33rd) shot a 214, while Brian Balthrop (t-39th) shot a 215. Freshman Trey Tarpley, who shot a even par in the final round, finished t-71st with a 223.

For the final round, Iten and Bradley led the way, both shooting final-round 69s, to pace four Govs players with under par. Sherrod carded a 70, while Balthrop shot a 71.

“It was pretty cool to see two freshmen leading the team and seeing them getting some experience,” Kayden said. “Luke and Brian were under par, so we finally had four guys in red. That was good to see.”

The home event was the Fall finale for the Govs, who will now take some time off before beginning practice for the Spring season. As expected, the F&M Bank APSU Intercollegiate was the Govs best Fall team score. The strong finish left a good impression with Kayden as he prepares for another tough OVC race in the spring.

“I think we’ve got a good chance,” Kayden said. “There are a lot of teams that are really close. Obviously, Jacksonville State had a superior week, they haven’t done that every week, but they’ve played well. If we can get our guys clicking, we’ll have a chance. Murray State and Eastern Kentucky all have good teams.