Clarksville, TN – Austin Peay State University men’s basketball team will face Fairfield in a noon, Saturday, February 19th, ESPNU BracketBusters contest, in Bridgeport, CT, which will be televised on ESPNU. The Govs are one of 11 nationally televised games, selected from a pool of 114 teams, the largest pool in the event’s history.

It will be the eighth time – the most of any Ohio Valley Conference school – Austin Peay (14-9) has played in the BracketBusters series as well as the third time APSU has been selected as one of the televised games.

The Stags are defensive-oriented team, holding opponents to 60 points or less 16 times this season. Sophomore Derek Needham is one of three Stags with more than 27 steals, while sophomore Ryan Olander, a 6-11 center, averages 2.0 blocks per game. Needham (14.0 points per game) and Olander (10.0 ppg) also are Fairfield’s scoring leaders – the only players averaging in double figures.

Last season, the Governors played host to Oral Roberts, losing 89-80. As part of the BracketBuster agreement, those two teams will play in Tulsa in the 2011-12 season.

Right away, Austin Peay is preparing for a pair of home OVC games, beginning with a 7:30pm, Thursday contest against UT Martin. The Govs then host rival Murray State at 7:30pm, Saturday. 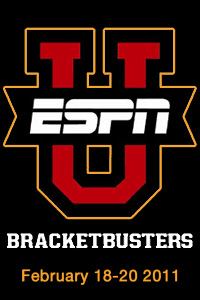 For the sixth straight year, ESPNU, the 24-hour college sports network, will televise five BracketBusters games while ESPN or ESPN2 will televise up to six contests. The 11 televised BracketBusters matchups were announced January 31st. OVC schools have been selected for TV matchups five times overall, with the Govs appearing three times—Wichita State (2004) and Akron (2007) being the previous two appearances.