Nashville, TN – New Orleans catcher Brad Davis drew a bases-loaded walk from Sounds reliever Zack Segovia in the top of the fourteenth inning to give the visiting Zephyrs a 4-3 victory over Nashville on a gorgeous Sunday afternoon at Greer Stadium.

With the win, New Orleans avoided a season-opening sweep by the Sounds (3-1). 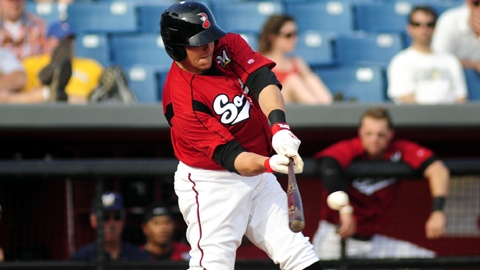 The contest was the first extra-inning affair of the year for both teams and the second in the Pacific Coast League. It was Nashville’s longest game since a 15-inning affair in Albuquerque on June 24th, 2009.

Nashville relievers retired 15 consecutive Zephyrs batters from the ninth through thirteenth frames before Ozzie Martinez opened the fourteenth with an infield single off Segovia. Ruben Gotay followed with a bunt up the third base line that Sounds infielder Taylor Green let roll past him. The ball stayed fair and New Orleans had runners on first and second.

After a subsequent sacrifice bunt attempt by Joe Thurston was fielded by Green and erased Martinez at third, Segovia uncorked a wild pitch to move the runners to second and third with only one out. Aaron Mathews was intentionally walked to load the bags for Davis, who drew the game-winning free pass after falling behind 0-2 in the count to start the at-bat.

New Orleans reliever Jose Ceda (1-0) worked around a one-out single by Brett Carroll (3-for-6) to blank the Sounds in the bottom of the fourteenth to secure the win and pick up his first victory of the year. The right-hander worked two scoreless frames in the contest.

Segovia (0-1) was saddled with the Sounds’ first loss of the season after surrendering the game-deciding run in his two innings of work. The right-hander has allowed both runs allowed by Nashville relievers this season; the other six members of the Sounds’ relief corps have combined for 14 1/3 scoreless innings through the club’s first four games.

Sounds starter Frankie De La Cruz held New Orleans hitless for the first four frames before running into trouble in the fifth. After Z’s catcher Brad Davis led off with a single and Mike Cervenak drew a four-pitch walk, former Vanderbilt star Ryan Klosterman drove the first pitch he saw from the right-hander over the left field wall to give the visitors a 3-0 lead. The blast was the infielder’s first of the year.

The three runs in the New Orleans fifth matched the club’s run total from their first 31 innings of play against the Sounds to start the season. They were held to just one run per game by Nashville pitching in each of the previous three contests between the clubs.

Sounds right fielder Brendan Katin put the home team on the board in the sixth when his two-out single to right off New Orleans starter Tom Koehler drove in Mat Gamel, who preceded Katin with a double.

Carroll, the Sounds’ center fielder, kept the deficit at two runs in the top of the eighth when he fielded a two-out Josh Kroeger single and threw out ex-Sound Vinny Rottino at the plate to end the inning as he attempted to score from second on the knock.

The Sounds evened the score at 3-3 with a pair of runs against the Z’s bullpen in the home half of the eighth. Edwin Maysonet blooped a one-out single down the right field line off Jay Buente then moved to third when Carroll followed with a single, which extended the outfielder’s hit streak to four games.

Left-hander Victor Garate was summoned to the mound to face Gamel and walked the Nashville slugger to load the bases for Katin, who drew a six-pitch free pass from the southpaw to force in Maysonet and make it a 3-2 contest. Garate recovered to fan Chris Nowak for the second out but then walked Brandon Boggs to allow Carroll to trot home with the tying run.

Neither starting pitcher factored in the decision despite a pair of quality starters. The Zephyrs’ blown save took away a potential win for Koehler in his first career Triple-A outing. The 24-year-old held the Sounds to one run on four hits while fanning four over six frames. De La Cruz authored a quality start in his Sounds debut, allowing three runs on three hits with three walks and six strikeouts over six innings of work.

The Sounds missed an opportunity to end it in the twelfth frame, when they had the bases loaded with one out against Z’s reliever Steve Cishek. The right-hander recovered to induce a fielder’s choice groundout from pinch-hitter Eric Farris that erased Carroll at the plate, then struck out Brandon Boggs on a 3-2 offering to escape the jam unscathed.

Infielder Taylor Green made his career Triple-A debut for the Sounds in the contest and went 0-for-4.

The Sounds continue their opening homestand on Monday evening with the 7:05pm opener of a four-game series against the Oklahoma City RedHawks, the new Triple-A affiliate of the Houston Astros. Veteran left-hander Sam Narron will make his 2011 debut with a start for Nashville. Oklahoma City will counter with right-hander Henry Villar.

It will be Dollar Dog Night at the ballpark as well as the first Money Monday of the 2011 season; all fans in the attendance can register to win prizes and experiences revolving around third-year Sounds skipper Don Money.