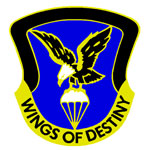 Gayler has commanded the 101st CAB since 2009. During his tenure, the brigade deployed to southern Afghanistan in support of Operation Enduring Freedom. Under Gayler’s command, the brigade provided Army aviation support for U.S. and NATO operations in Regional Command-South, West and Southwest from February 2010 to March 2011.

Col. Gayler will be remaining at Fort Campbell as the new Chief of Staff for the 101st Airborne Division where he will be replacing Col. Pete Johnson when he moves on to his next assignment.

The change of command ceremony is rooted in military history dating back to the 18th century during the reign of Frederick the Great of Prussia. At that time, organizational flags were developed with color arrangements and symbols unique to each particular unit. To this flag and its commander, the soldiers of the unit would dedicate their loyalty and trust. When a change of command takes place, the flag is taken from the outgoing commander and then passed to the individual assuming the command by their superior officer. This gesture is done in front of the unit so that all could see and witness their new leader assuming his dutiful position. He who holds the flag also holds the soldier’s allegiance. This symbolic tradition has survived throughout military history.

Shortly before the change of command ceremony Maj. Gen. John F. Campbell held a small awards ceremony. Col. William K. Gayler received the Legion of Merit for his outstanding performance as the commanding officer of the 101st Combat Aviation Brigade.  His wife Michelle Gayler, received the Outstanding Civilian Service Medal for her support of the soldiers in her husband’s brigade during the previous deployment.

“It’s been our great honor to have this great soldier command this great brigade in combat with distinction over the last 26 months in command,”  said General Campbell. He then gave Col. Gayler some very high praise, “When you are on the ground there, and you know you’ve got Bill and his brigade in support down in Regional Command South which was very very kinetic; the main effort in Afghanistan. And you’ve got these guys flying over top lead by Bill; great battalion commander great soldiers, great pilots, great maintainers. You know when you go in that they are going to get you in the right place, if you get hurt they are going to get you out. It was unfortunate that we couldn’t keep the entire division together. But when we had to put Strike down south we knew Destiny was going to be with them, and we felt very good about that. It is a tribute of what you did to get your guys ready to go, and they did incredible over there. The Army has recognized that…”

The Invocation was given by the 101st Combat Aviation Brigade Chaplin Vincent Luttrell.

Following the Invocation, The Adjutant Capt. Kimberly Culver called out “Sound Attention,” this is a call of alarm during which the soldiers turn out under arms and officially begins the ceremony. The Adjutant then called out “Sound Adjutants’ Call”, this indicated the Adjutant was about to form the brigade. The sound of the trumpets call rippled across the field.

The Adjutant then instructed the band to sound off, which set the Virgina Army National Guard 29th Infantry Division Band to parading before the troops. The band was at Fort Campbell for cross training, and was able to fill in for the 101st Airborne Division Band which had most of its members still away on block leave. They performed admirably.

Maj. Andrew Beyer, the Executive Officer of the 101st Combat Aviation Brigade, serving as The Commander of Troops for the ceremony; and the brigade staff took their positions on the field. They were saluted by the assembled troops.

The reviewing party which consisted of Col. Gayler the outgoing commander and Col. Paul Bontrager the incoming commander took the field. They were then saluted by the assembled troops.

The Commander of Troops reported to the Brigade Commander, “Sir, the brigade is present” to which Col. Gayler responded “Air Assault”.

Now it was time for Col. Gayler to inspect his troops one last time, as Col. Lillibridge accompanied him. The announcer read a history of the brigade. Following the inspection the reviewing party resumed their position in front of the reviewing stand.

At this point in what is the most visually stunning part of the ceremony, it was time for the officers of the units and the various colors to advance to an assembly point; then when they were all in place they were marched en masse to a spot before the reviewing stand where the official handing off of the brigade colors and the command would take place.

The brigade and those in attendance then rendered Honors to the Nation, as the National Anthem was played.

Maj. Gen. Campbell, the reviewing officer joined up with the reviewing party. Then they marched on the field to pass the brigade colors.

The Custodian of the Colors, Brigade Command Sgt. Maj. Lebert O. Beharie, the senior enlisted soldier in the unit and principle advisor to the commander then removed the 3rd brigade colors from the hands of the brigade color bearer Sgt. Parker; the color bearer exemplifies the high standards of discipline, conduct, and military expertise that go with the responsibility of carrying the flag that means so much to his fellow soldiers. Beharie handed the brigade colors to Col. Gayler. Then Maj. Gen. Campbell then took them placed them in the hands of Col. Bontrager.

With the command transferred the reviewing party walked from the field, and a vigorous round of applause broke out.

Sgt. Norton presented a bouquet of red roses to Col Gayler’s wife Michelle on behalf of the officers, non-commissioned officers, and soldiers of the brigade for her dedicated service as the first lady of the Destiny family. Single red roses were given to his daughters Katie, Maggie and Samantha.

Sgt. Bell presented a bouquet of yellow roses to Col. Bontrager’s wife Kelly on behalf of the officers, non-commissioned officers, and soldiers of the brigade welcoming her in to the Destiny family, a single yellow rose was presented to his mom, mother-in-law, and daughter Katie.

Maj. Gen. Campbell then took the podium to make a few remarks.

He was followed by Col Gayler.

Closing out the remarks was the new commander of the 101st Combat Aviation Brigade Bontrager.

Then the soldiers passed in review, closing out the ceremony.

After the ceremony, Col. Gayler and his family then made themselves available to well wishers.

Col. William K. Gayler is a Distinguished Military Graduate of North Georgia College in Dahlonega, Ga. There he received a Bachelor of Business Administration and was commissioned as an aviation officer.

Upon completing the Officer Basic Course and Flight School, he was assigned to 1st Battalion, 3rd Aviation Regiment, 2nd Armored Division, Fort Hood, Texas where he served as a scout platoon leader and liaison officer.

Completing his tour in Europe, he was assigned as the aide-de-camp to the commanding general of the U.S. Army Aviation Center and Fort Rucker, Ala.

He later served as the commander of A Co., 1st Battalion, 14th Aviation Regiment responsible for all AH-64D Longbow individual operator and maintainer training.

Following the Command and General Staff College, he served again at Fort Campbell, Ky. as a battalion operations officer and executive officer with 2nd Battalion, 101st Aviation Regiment.  While assigned to the 101st Airborne Division (Air Assault), he deployed in support of Operation Iraqi Freedom as the brigade operations officer and executive officer of the 101st Combat Aviation Brigade.

He later served as the deputy director of the Directorate of Evaluations and Standardization at Fort Rucker, Ala.

His current assignment is commander of the 101st Combat Aviation Brigade in the 101st Airborne Division (Air Assault).

He holds two Master’s Degrees, one in Master of Military Arts and Science and another in National Security Strategy.

Some of Col. Gayler’s awards and decorations include the Bronze Star Award, Meritorious Service Medal, Air Medal and Army Commendation Medal. He has been awarded the Air Assault Badge, Master Army Aviator Badge and is a member of the Honorable Order of St. Michael (Bronze Award).

Col. Gayler is married to the former Michele Nash of Atlanta, Ga. and has three daughters, Katie, Maggie and Samantha.

Originally from Goshen, Indiana, Colonel Paul Bontrager enlisted in the U.S. Army in 1982. Following his enlisted tour, which he spent in the 101st Airborne Division (Air Assault), Fort Campbell, Kentucky, Colonel Bontrager graduated from Austin Peay State University as a ROTC Distinguished Military Graduate with a Bachelor of Science degree in Political Science. He also holds a Masters of Science degree in Education from Kansas State University and a Master of Science Degree in Joint Campaign Planning and Strategy from the National Defense University. Colonel Bontrager is a graduate of the Aviation Officer Basic and Advanced Courses, the Cavalry Leaders Course, the Combined Arms and Services Staff School, the U.S. Army Command and General Staff College, and the Joint Advanced Warfighting School.

Paul is married to the former Kelly Gilligan of Lackawanna, New York. They have one son, Zachary, who is a senior at the Virginia Military Institute and one daughter, Katie, who is a sophomore at the University of Alabama.