Edwardsville, IL – All it took was seven and a half minutes and Austin Peay State University women’s basketball team saw its halftime lead dissolve into a 72-61 Ohio Valley Conference loss to SIU Edwardsville, Monday night, at the Vadalabene Center.

Austin Peay (5-16, 2-6 OVC) led 34-32 at the halftime break. However, the Lady Govs offense stalled out of the gate in the second half, failing to score a basket on its first 14 possessions covering 7:30. Austin Peay committed nine turnovers in that opening span, missed four shots and scored its lone point on Jasmine Rayner’s 1-of-2 trip at the line

Whitney Hanley ended Austin Peay’s shooting drought with a basket at the 12:37 mark and Kaitlyn Hill scored the game’s next basket to trim the lead to six points, 47-39, with 12:00 left. But SIUE scored the next four points to start a 11-4 run that gave it a lead APSU would not threaten.

The Cougars scored the game’s first eight points and looked poised to run away early. But Austin Peay responded with  a 17-3 run that included individual six-point bursts by Leslie Martinez and Nicole Olszewski, to take a 17-11 lead with 12:30 left in the first half.

Later in the first, SIUE used another 13-4 run to build a 30-25 advantage with only 3:12 remaining in the period. Austin Peay scored the half’s final seven points, the last five by Hanley, to take a two-point halftime lead.

The second half woes overshadowed an impressive night for Kaitlyn Hill who recorded her first career double-double in front of her family. Hill had a career-high 10 points in the first half alone and finished the game with 14 points and a career-high 13 rebounds.

Hanley snapped out of her recent shooting woes to score a game-high 25 points on 9-of-16 shooting while also grabbing five rebounds. However, no other Lady Govs player had more than 10 points. 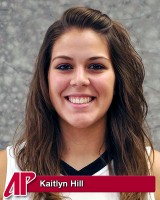 Austin Peay tied a season-high with 26 turnovers, including 14 in the second half that SIUE turned into 14 points. The Lady Govs did win the rebounding battle – by a slim 44-43 margin – for the first time in conference play.

Hempen led SIUE with 17 points off the bench. Raven Berry and Michaela Herrod each recorded double-doubles. Berry finished with 14 points and 13 rebounds while Herrod posted 13 points and 17 rebounds.

The Copies in a Flash APSU Player of the Game was Kaitlyn Hill.

Austin Peay returns home for a visit from UT Martin – the OVC top-scoring squad – in a 5:15pm, Saturday contest at the Dunn Center. The second-place Skyhawks are averaging 87.0 points per game in league action, including an 84-61 victory at Eastern Kentucky, Saturday.

The two squads have split their regular-season series the past two seasons, the home team winning each of the last four games. Austin Peay won a 69-61 decision in Clarksville last season.