Fort Campbell, KY – He puts on his body armor before the break of daylight. He then runs a total of four miles, swings across ropes, climbs walls, sprints across balance beams and low crawls through mud. He is not an infantryman by job title, but he trains as so. He is a brigade staff member with the 2nd Brigade Combat Team, 101st Airborne Division (Air Assault).

The Strike Brigade’s legal team, military intelligence personnel, medical operations office, human resource group and other members of the headquarters staff, all ensure the Strike infantrymen are able to accomplish their tough and demanding missions. And even though their day-to-day obligations may not require the physical training of an 11-series Soldier, they know the importance of upholding combat physical standards and conduct combat physical training every Thursday, most recently in ‘Cav-Country’ off of Mabry Road, March 22nd.

“We have representatives from all the staff sections across the brigade and this hardcore PT tests our physical and mental endurance, which helps build the team and organization,” said Maj. Curtis Lee Rowland, the executive officer of the brigade tasked to conduct operations at Fort Campbell while advisory teams deploy to eastern Afghanistan. “While the other members of the brigade’s staff are at the Joint Readiness Training Center and are about to deploy, these staff members have stepped up into unfamiliar roles and this is a good test of their heart.”

The timed event had seven teams of three, wearing body armor weighing about 35-pounds, run/sprint a mile and a half to circled obstacle course, a mile in circumference, with different challenges throughout.

The competitors would then run/sprint the mile and a half back. The course challenges included rope swings, 10-foot walls climbs, five-foot barrier jumps, balance beam sprints, jungle bar walks and low crawls through the dirt. The participants agreed the combination of sprinting in combat gear and tackling the obstacles was extremely challenging.

“This is no doubt a smoker,” said a covered in sweat and heavily breathing Chief Warrant Officer 2 Keith Longoria, with the brigade’s network operations section. “The obstacles get to you, but really it’s the mile and a half down and the mile and a half back that breaks you, absolutely.” 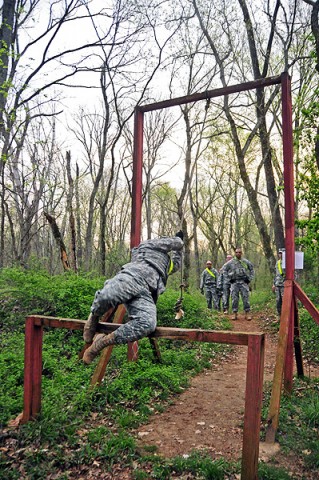 The beads of sweat and shortness of breath confirmed each team pushed themselves as they all completed the four-mile course. The brigade’s staff members agree on the need for consistent combat physically training.

“Combat focused training is a necessity and must be done,” said Capt. Gavin Grimm with the brigade’s legal office. “Getting all the shops out here, in full kit, building endurance and pushing each other is important; this is good training.”

Capt. David Wrighten with the brigade medical operations team, concurs with the Strike lawyer and also sees the need to be physically ready to fight the enemy.

“The combat focused PT was a beast and it’s important for us to be able to, at any time, step on the ground over there and fight,” said Wrighten, who was one of the participating staff members that is soon deploying to eastern Afghanistan. “As a Soldier, our first job is as an 11 bravo, so I have to be able to conduct infantrymen missions even though I’m a medical service corps officer and the combat focused PT like we did definitely helps gets us there.”