Clarksville, TN – A suspicious activity call resulted in the arrest of three adults and one juvenile on a string of burglaries in the Thornberry Drive, Kim Drive, Trevor Drive, and Kim Drive area.

On July 17th, 2012, a little before 1:00am, a neighborhood man spotted a small mini-van parked near the dead-end of Kim Drive and males getting out of the van wearing backpacks. He further observed the men walking and approaching vehicles in different yards. 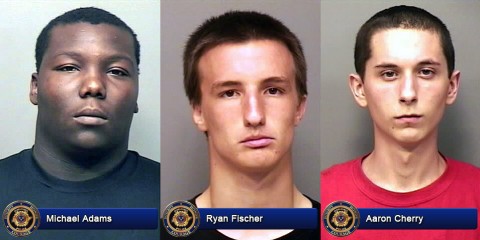 Clarksville Police were called and responded to the area, but the males and vehicle were gone when officers arrived.

Officers flooded the area and Officer William Becker located a vehicle matching the description of the suspicious vehicle. Shortly after that, 18 year Ryan Fischer was found walking in the Thornberry Drive area. He told Officer Becker that he was looking for a missing dog, but the story did not hold up under scrutiny and Fischer was detained.

In the meantime, officers set up surveillance on the van and eventually two adults and one juvenile returned to the van. They were separated and detained in different vehicles until Detective Rodney Lifsey arrived on scene.

Detective Lifsey interviewed all four of the males and they confessed to committing multiple vehicle burglaries in the area and were targeting unlocked vehicles. The location of some the stolen property was revealed during the interviews and other property was located by officers searching the area. At this point, 5 vehicle burglaries have been solved and additional cases are pending.

Most of the property located has been returned to the owners. Police are still trying to locate the owners of some of the recovered property.

Anyone missing property from the Burglarized area are asked to contact Detective Rodney Lifsey, 931.648.0656, ext 5298.

The investigation is ongoing and additional charges may be filed.

The 16 year old male juvenile was charged with Three Counts of Burglary.