“So we have to have guys be able to wear more than one hat,” continued Cotreau. “So guys that generally don’t deal with mortars are going to have to be able to put that hat on as well if they’re artillery.”

The mortar teams practiced on the 81 mm mortar guns while two teams fired on 120 mm guns. 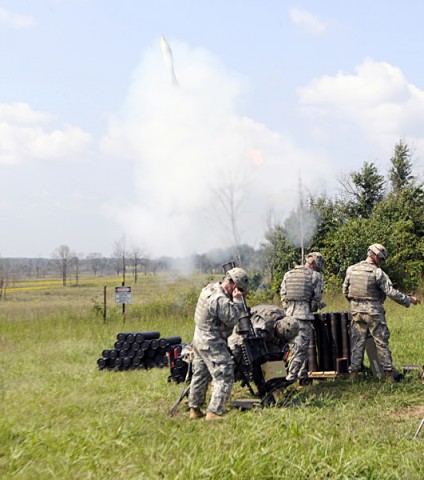 Becker stated that mortars are used almost daily so training is highly important since some missions are “danger close” and friendly casualties need to be avoided.

“It’s an indirect fire weapon,” Becker added. “Pretty much we can illuminate the night and blow stuff up.”

“These guys are patient with us,” said Ward. “Guys are picking it up. It’s not too much different than learning on the artillery pieces, just a smaller cannon. It’s a learning process.

“These guys have spent so many years and months to train on them and we’ve only had a few days,” Ward added. “We’re just trying to get the speed down.”

Ward mentioned that despite the size, not much else was different in weapon systems.

“The sights are a lot different,” said Ward. “On the M777 we shoot digital. We had a screen that has arrows that point which way we need to go. If we’re on the M119 our sights and everything’s right there in our face. We’re standing upside down on these things.”

Cotreau stated that despite being cross-trained, the artillerymen will still have to perform both jobs during their deployment.