Clarksville, TN – It has been a rare occasion Austin Peay men’s basketball team has opened at home, at least under head coach Dave Loos. 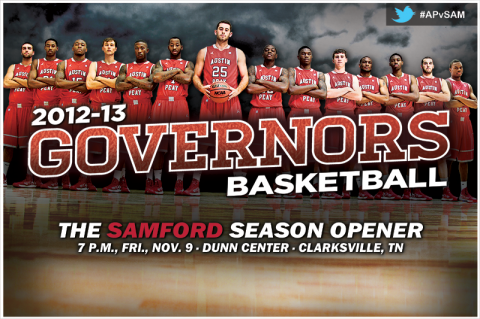 Samford and Austin Peay certainly are familiar with each, the former being a member of the Ohio Valley Conference from 2003-04 to 2007-08. But the Bulldogs have a new face on the bench since the Govs last saw the Bulldogs.  Bennie Seltzer, a former Indiana assistant coach, has replaced Jimmy Tillette. In addition, former Kentucky star and long-time NBA player Scott Padget serves as a Samford assistant coach.

Seltzer was not left with a bare cupboard. Even though the Bulldogs finished 10-19 last year, they return standout guards Will Cook (8.0 ppg, 5.3 rpg) and Raijon Kelly (9.4 rpg) while forward Tyler Hood (11.1 ppg) also returns. Kelly and Hood were named to the Southern Conference All-Freshman team.

The Governors also are on the young side. After watching four key starting seniors end their respective careers a year ago, the Govs have just two seniors, one being Anthony Campbell, who is coming off ACL surgery on the same knee in consecutive seasons; and the other is guard Jerome Clyburn, who will miss the season’s first month after knee surgery.

The Govs started a pair of freshmen, guard AJ Lynch and center Chris Horton in the exhibition victory against Central Missouri. Campbell and fellow forward Will Triggs, a junior, led the way with 17 points while sophomore Chris Freeman came off the bench to add 16 points.

Junior guard Travis Betran, a late signee from Kilgore College, is expected to man the guard position next to Lynch while Campbell and Triggs will flank Horton up front.

The Series: This is the 21st meeting between Austin Peay, a member of the Ohio Valley Conference, and Samford, a Southern Conference member. The Governors hold a 14-6 advantage in the series and were 9-3 against the Bulldogs when they were OVC members from 2003-04 through 2007-08. The two teams last met in the 2007-08 season, the two teams splitting the two contests.

What A Loss Would Mean: It would be the second straight season the Govs opened with a loss. The Govs would drop to 32-25 all-time against current Southern Conference teams. It would drop Dave Loos to 0-1 against new Samford coach Bennie Seltzer. It would be Dave Loos’ 311th APSU loss and 364th all-time.

Redshirt sophomore guard Thomas Greer played for his father, Mike, at West Carroll High School where he was a Class A Mr. Basketball nominee. His sister Addy, was a walk-on player at UT Martin a year ago.

Redshirt sophomore forward Joe Harms, a physics major, spent this past summer working on building a fully-functioning desktop Nuclear Magnetic Resonance (NMR) machine for university use. His work was a subject of a feature on NBCsports.com.

Junior forward Will Triggs was a prep teammate of forward Anthony Campbell as a sophomore. As a prep senior, Triggs recorded double-doubles in 28 games.

Junior guard Travis Betran, a Harlem, NY, native, didn’t begin playing basketball until he was in fifth grade, but became a regular at Rucker Park, the most famous streetball court in the country.

Freshman guard AJ Lynch was called the “most underrrated guard” in Alabama while playing at Bount High School in Mobile.

The OVC begins divisional play for men and women’s basketball beginning with the 2012-13 season, with APSU a part of the league’s new West Division. The addition of Belmont, July 1st, gave the OVC 12 member institutions, the largest Conference membership since the league’s inception in 1948 (the OVC is currently the nation’s eighth-oldest Division I conference).

The 2012-13 schedule features 16 games with each team playing divisional foes twice during the season (home and away) and playing teams in the opposite division once a season. When creating the schedule it was a priority to play as many games as possible after January 1st; the final schedules feature only a handful of late December games.

Men’s games will continue to be played on Thursday and Saturday while the women’s games will be played on Saturday and Monday for a second straight season. The 2013-14 schedules will mirror these schedules, meaning if a team played the 2012-13 game at a Conference opponent, that team will host that same opponent in 2013-14.