Clarksville, TN – The sultry sounds of one of the most acclaimed vocalists of the 20th century will fill the Roxy Regional Theatre, February 8th through March 2nd, in the perennial favorite and beloved musical “Always…Patsy Cline”.

Taking the stage in tribute to the country music legend who died tragically in a plane crash at the height of her career is Jacque Clydesdale. Although currently based out of New York, Jacque has strong ties to Music City, originally being from Brentwood, Tennessee, and having performed as a soloist with the LA Pops Orchestra in a tribute honoring Diane Warren, singing Shania Twain’s famous “From This Moment” duet with Grammy Award Winner Bryan White.

Written by Ted Swindley and directed by Tom Thayer, “Always…Patsy Cline” is based on a true story about Cline’s friendship with a fan from Houston named Louise Seger (played by Roxy favorite Leslie Greene) who befriended the star in a Texas honky-tonk in 1961 and continued a correspondence with Cline until her tragic passing at age 30. 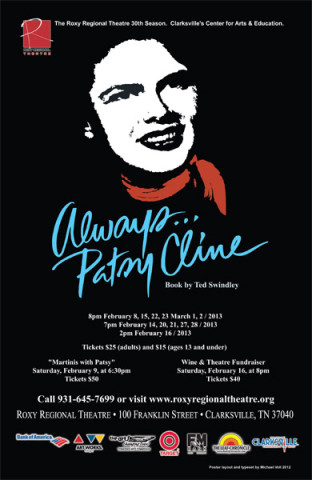 On Saturday, February 9th, treat your valentine to an unforgettable evening of music, down-home country humor, tasty drinks and sumptuous hors d’oeuvres with “Martinis with Patsy.”  Courtesy of Pal’s Package Store, martinis will be flowing at 6:30pm, complemented by a menu created especially for this event by Fire & Ice Catering.  “Always…Patsy Cline” will take the stage at 8:00pm.  Tickets are $50.00.

For those who prefer a post-Valentine’s celebration, the Roxy is offering a special dinner and show package on Saturday, February 16th. The 8:00pm performance of “Always…Patsy Cline” will be preceded at 6:00pm by a delectable dinner for two at Edward’s Steakhouse (107 Franklin Street), featuring beef filet, salad, choice of side and a dessert, complemented with a bottle of red wine. Tickets are $100.00/couple.

“Always…Patsy Cline” runs February 8th through March 2nd, playing Wednesdays and Thursdays at 7:00pm and Fridays and Saturdays at 8:00pm, with a 2:00pm matinee on Saturday, February 16th. (There will be no performance on Wednesday, February 13th.)