Clarksville, TN – To be considered under the new Austin Peay State University Athletics Hall of Fame Honors category, a student-athlete, coach or athletic administrator must have completed their eligibility/employment/tenure at least 50 years ago, whose credentials may be difficult to judge due to the passage of time when evaluated with nominees from more recent eras. 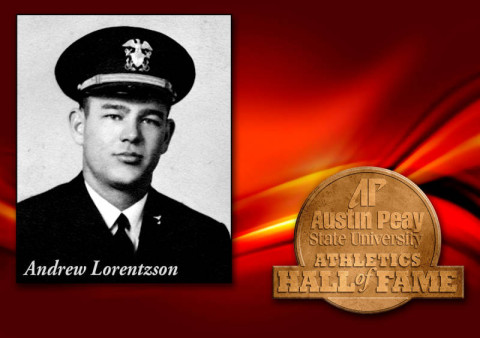 Andrew “Loro” Lorentzson is the perfect example as such and an important reason why the Honors category was established. He will be one of three people, joining Governors baseball coach Gary McClure and longtime team physician Dr. Cooper Beazley, as the 101st, 102nd and 103rd to be inducted into the APSU Athletics Hall, 9:00am, Saturday morning in a breakfast ceremony in the Dunn Center front lobby.

Lorentzson played basketball, football and baseball during his stay when Austin Peay was a two-year school. As a football player, he was an end and placekicker. He was a third baseman in baseball while a forward in basketball.

When Lorentzson began playing in 1936-37, the school itself was known as Austin Peay Normal-it was a two-year institution-and its nickname was the Terrors. They played in the Mississippi Valley Conference, comprised mostly of four-year schools.

It was basketball where “Loro” made his name. In fact, he was the first star for head coach Fred Brown. In 1936-37, despite playing against older four-year school competition, Lorentzson averaged 13.1 points per game, scoring a then-school record 288 points. Despite an overall 8-14 record, the Terrors finished with a fourth-place 6-5 Mississippi Valley record.

A year later, Austin Peay withdrew from the Mississippi Valley Conference to join the Southeastern Conference of Junior Colleges, a more reasonable fit for the two-year institution. Austin Peay opened that season playing Vanderbilt in Nashville. The Govs lost a nail biter, 43-42, with Lorentzson scoring 20 of APSU’s 42 points.

Later that year Austin Peay played in the Southeastern Junior College Championship-it was during the tournament the nickname Governors literally was born by one of the Chattanooga papers, with use occurring the following (1939-40) season.

In the first round, Lorentzson led the Terrors with 16 points against Tennessee Wesleyan in a 41-34 victory and he followed that up with a team-leading 13 points against Sneed in the quarterfinals.

In the semifinal, Lorentzson again led the way with 17 points as Austin Peay defeated St. Bernard, 59-35. That put Austin Peay Normal into the finals against Middle Georgia and the Clarksville-based school captured a 54-52 win. Lorentzson was one of five Normal players in double figures, ending with 12 points. As a result of his efforts-averaging 14.5 points per game during the four games, Lorentzson was chosen to the all-tournament team.

After leaving Austin Peay, Lorentzson studied math at Centre College, earning All-America honors while playing basketball there, before receiving his bachelor’s in math from Eastern Kentucky. Later he earned his master’s in education from Kentucky. He used those degrees to teach math and coach in Kentucky, Georgia and later Naples, FL.