The 2013 OVC Indoor Track Athlete of the Year, Grey lived up to that billing, Saturday, winning the event with a 2:12.61 mark that was nearly three seconds faster than her next closest competitor. She’s Austin Peay’s first indoor 800m champion since Sheena Gooding won the event four years in a row (1999-2002) during her Hall of Fame career.

She led the Lady Govs 4x400m relay team to a third-place finish with a 3:51.64 run with help from freshman Breigh Jones and Kymmalett Ross and junior Taelor Slaughter. 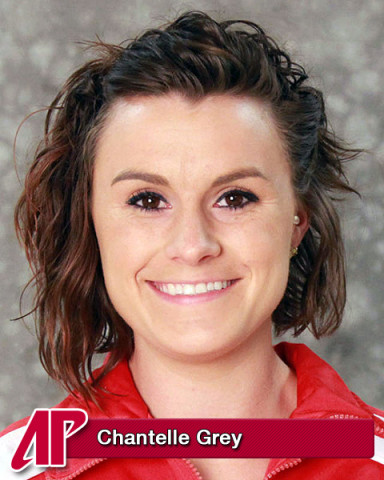 “Chantelle was never challenged today,” said head coach Doug Molnar. “She ran a phenomenal race in the 800, then came back and moved us from fourth to third during her leg of the 4×400. She really carried us today.”

Jones rallied slightly from a low qualifying mark, finishing seventh with a 57.21 mark to earn the Lady Govs two points toward the team tally.

Like Richards, senior thrower Jasmine Foster followed up on her strong start with an equally impressive Saturday performance. She finished sixth in the shot put with a 12.96m (42′ 6.25″) toss.

Austin Peay split a point in the pole vault, with senior Nicole Bressner and junior Molly Basch both hitting 3.10m (10′ 2.0″) to tie for eighth.

“We picked ourselves up today,” Molnar said. “I think some of our younger kids were a bit intimidated on the first day. We talked about it last night, and I think they showed more toughness and aggression today.”