HomeBusinessWeekly Market Snapshot from Frazier Allen for the week of May 12th,...
Business

Weekly Market Snapshot from Frazier Allen for the week of May 12th, 2013

The economic calendar was thin. Jobless claims remained low, consistent with a low level of job destruction. However, the March JOLTS data (that’s the Job Openings and Labor Turnover Survey) continued to show relatively low rates of hiring and quits. Fed Chairman Bernanke spoke in some detail about how the Fed is monitoring the financial system for vulnerabilities.

One concern is that accommodative monetary policies could lead to excessive risk-taking. Bernanke said the Fed is watching for that, but he did not say whether it is currently seeing it. China indicated that it would move to free up capital flows into and out of the country. That’s one step toward eventually become an important global currency (although there is a long way to go) and will likely lead to a strengthening of the currency in the near term. Treasury reported a large budget surplus for April, implying a smaller-than-expected deficit for FY13.

The positive sentiment in equities continued, with the DJIA pushing above 15,000. Bond yields moved higher on concerns that the Fed is considering when to begin tapering its asset purchases. Commodity prices fell. The dollar strengthened.

Next week, a number of the mid-month economic reports will serve as important hurdles for the financial markets. The biggest will be the retail sales report, which kicks off the week. Unit auto sales fell (relatively to March) and gasoline prices declined, which should put downward pressure on the headline sales figure. Core retail sales are expected to have been lackluster. Industrial production should be restrained in April by a drop in the output of utilities (following a cold-weather boost in March) – manufacturing output is expected to be mixed across industries but generally soft. Seasonal adjustment will amplify the impact of lower gasoline prices in the inflation reports. Core inflation is expected to remain mild. 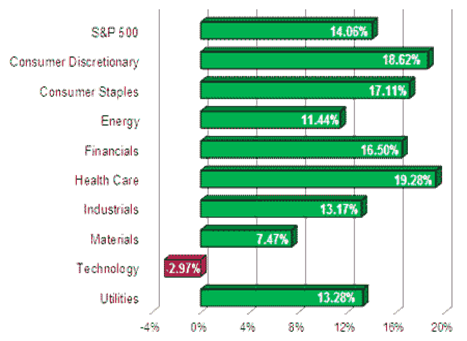 The information contained herein has been obtained from sources considered reliable, but we do not guarantee that the foregoing material is accurate or complete. Data source: Bloomberg, as of close of business May 2nd, 2013.