According to Sheriff’s Spokesman Ted Denny, “Montgomery County Sheriff’s Department received a tip Roni Proctor was at the Fortune Market on Highway 48. She was taken into custody without incident by Deputy Cody Lannom, Deputy Dan Gagnon, and SGT Kenny Austion.” 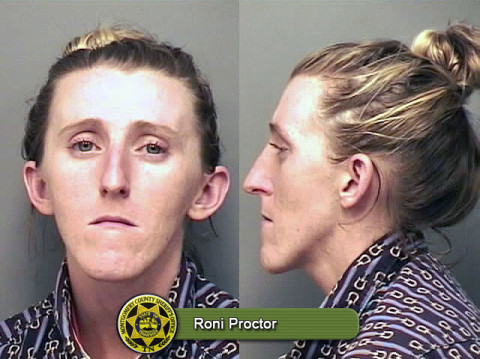 The driver of the Malibu, 17 year old Kylie Eastin, who along with her passenger, 15 year old Ashley Travis were Lifeflighted to the Vanderbilt University Medical Center in Nashville, TN. Roni Proctor was transported by EMS to Gateway Medical Center.

According to the Tennessee Highway Patrol report, Proctor was drunk at the time of the accident. Eastin tried to avoid the oncoming vehicle but could not.

Proctor has been charged and booked into the Montgomery County Jail. Her bond is set at $105,000.