Nashville, TN – The Nashville Sounds held on to an early four-run lead Wednesday night at Greer Stadium to defeat the visiting Iowa Cubs by a 4-3 margin.

The Sounds put two runs on the board in the first inning via outfielder Josh Prince’s double down the left-field line. The hit scored Caleb Gindl, who singled on a grounder into right field, and Stephen Parker, having reached base on balls.

Gindl, who finished two-for-four, added two runs in the following inning with a double off the side of the left-field wall. The two-out rally was spurred by starting pitcher Johnnie Lowe’s first career hit: a double to dead center.

Lowe kept the I-Cubs hitless through the first three innings and finished after four, allowing two runs on two hits, walking two and striking out six in his first Triple-A start. His two runs came in the fourth inning on back-to-back RBI-hits from Dave Sappelt and Brad Nelson. 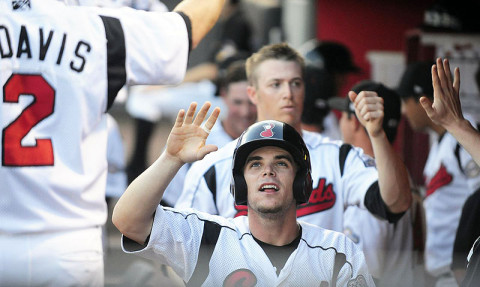 The I-Cubs added a run in the fifth, attacking Clay Hensley in his Nashville Sounds debut. The right-hander, added to the Nashville roster on Monday, started with a walk and allowed a double to pitcher Nick Struck. Logan Watkins drove in a run with a single to center. Hensley recorded a groundout and was relieved by Travis Webb (1-2), who prevented any further damage to pick up his first win of the season.

Rob Wooten finished the game on the hill for Nashville to collect his seventh save of the season. After allowing two singles, Wooten collected a bunt from Watkins and got the runner at third for the first out and capped it off with a game-ending double play.