Washington, D.C. – The U.S. Food and Drug Administration on Friday proposed an “action level” of 10 parts per billion (ppb) for inorganic arsenic in apple juice. This is the same level set by the U.S. Environmental Protection Agency (EPA) for arsenic in drinking water.

“The FDA is committed to ensuring the safety of the American food supply and to doing what is necessary to protect public health,” said FDA Commissioner Margaret A. Hamburg, M.D. “We have been studying this issue comprehensively, and based on the agency’s data and analytical work, the FDA is confident in the overall safety of apple juice for children and adults.”

“While the levels of arsenic in apple juice are very low, the FDA is proposing an action level to help prevent public exposure to the occasional lots of apple juice with arsenic levels above those permitted in drinking water,” said Michael R. Taylor, the FDA’s deputy commissioner for foods and veterinary medicine.

The FDA is establishing this threshold to provide guidance to industry. The agency takes the action level into account when considering an enforcement action, if it finds a food product exceeds the threshold. 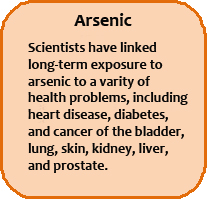 The FDA has been monitoring the presence of arsenic in apple juice for the past 20 years and has consistently found that samples contain levels of arsenic that are low, with few exceptions. New tools, however, have allowed the agency to better understand the breakdown between organic and inorganic arsenic levels. Last year the FDA released findings from its latest data collection and analysis of 94 samples of arsenic in apple juice. The analysis showed that 95 percent of the apple juice samples tested were below 10 ppb total arsenic; 100 percent of the samples were below 10 ppb for inorganic arsenic, the carcinogenic form of arsenic.

The proposed level of 10 ppb takes into account this sampling data plus a recently completed, peer-reviewed risk assessment of inorganic arsenic in apple juice conducted by FDA scientists. The assessment is based on lifetime exposure.

Arsenic is present in the environment as a naturally occurring substance or as a result of contamination from human activity. It is found in water, air, soil and foods. In foods, arsenic may be present as inorganic arsenic (the most toxic form of arsenic) or organic arsenic. FDA has been monitoring the levels of arsenic in foods for decades, and in 2011, increased its testing. The latest results confirmed that the amount of arsenic in apple juice is low. The agency has studied consumption levels among children and adults, and completed a scientific assessment. Based on this work, FDA is confident in the overall safety of apple juice for children and adults.

Inorganic arsenic may be found in foods because it is present in the environment, both as a naturally occurring mineral and because of activity such as past use of arsenic-containing pesticides. A known carcinogen, inorganic arsenic also has been associated with skin lesions, developmental effects, cardiovascular disease, neurotoxicity, and diabetes.

In conducting its new assessment on apple juice, the FDA was able to use data from two studies published in 2010, as well as a 2011 evaluation by the Joint Expert Committee on Food Additives and Contaminants of the Food and Agriculture Organization, part of the United Nations and the World Health Organization.

The agency will accept public comments on the proposed action level and the risk assessment for 60 days.

The FDA, an agency within the U.S. Department of Health and Human Services, protects the public health by assuring the safety, effectiveness, and security of human and veterinary drugs, vaccines and other biological products for human use, and medical devices. The agency also is responsible for the safety and security of our nation’s food supply, cosmetics, dietary supplements, products that give off electronic radiation, and for regulating tobacco products.