Paktya Province, Afghanistan – “Life starts in the mouth,” said Capt. Abby Raymond, brigade dentist for 4th Brigade Combat Team “Currahee”, 101st Airborne Division (Air Assault), and native of Anderson, IN. “If you don’t take care of your oral health it can have a systemic affect, it can affect your whole body, your job or your mission.”

The training was provided for the medics with the Afghan National Army’s 2nd Commando Kandak, 203rd Corps, as well as the ANA Special Forces medics and included classroom instruction, practical exercises and clinical exercises.

“We provided a didactic course on dental anatomy, oral hygiene instruction, how to perform a dental exam and how to do oral extractions,” said Capt. Shani Thompson, brigade dentist with 528th Sustainment Brigade, United States Army Special Operations Command, and native of Miami, FL. “They were very engaged in the classroom portion and especially excited with the clinical portion, where they actually got to extract teeth.”

Oral awareness is a new tool for the experienced Commando medics who have not had much in the dental field. 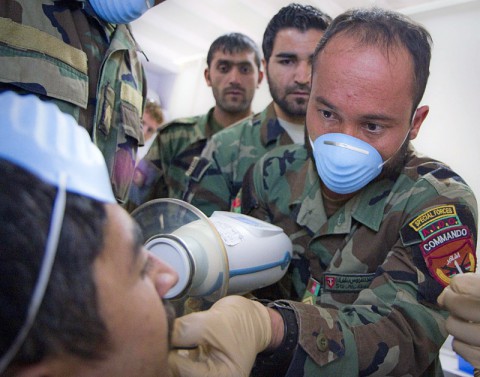 “What they have (for dentistry) is very minimal so we had to keep that in mind as we taught them some basic skills,” Raymond said. “The instruments and equipment is very limited to them.” He had the Commandos practice on teeth that he had pre-set in a plaster cast as a training aid, to give them a better idea on how to properly elevate a tooth and then extract it.

The plaster molds served as a perfect medium for practice, providing them with a realistic feel for how to use the instruments during an extraction before doing the real thing.

“We had them do practical exercises,” said Raymond. “They brought in live patients (for the exercise) and screened them to see which were the most severe cases.”

The live patients consisted of Commandos of their own Kandak. 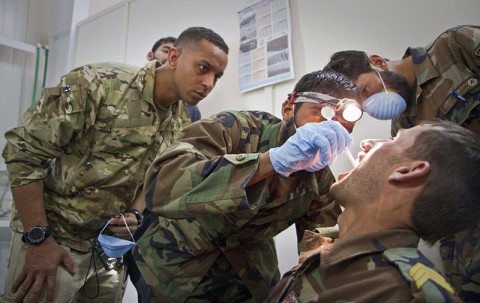 “We had fifteen Commandos come in to act as the patients,” said Thompson. “The Commando medics who were receiving the class performed exams on those soldiers and were able to diagnose and figure out what dental treatment was needed. We then focused on those who needed extractions and allowed them (the Commandos) to perform the extractions.”

“It was very, very interesting being able to see how a tooth is taken out,” said Sgt. 1st Class Gulstan Shinwari, commadant of the Afghan Nation Army’s 2nd Commando Kandak, 203rd Corps. “What we learned today was a great experience. Hopefully, for all of our guys, they now know how to properly take a tooth out.”

Through this experience the ANA showed not only an eagerness to learn but enjoyment in their job, as well.

“I liked the training all around but the extraction was my favorite,” said Sgt. Shameem Kar Daki, a medic with the ANA’s 2nd Commando Kandak, 203rd Corps. “We are very happy that our American brothers helped us learn about how to care for the mouth.”

Ensuring proper care for the mouth, as well as spreading that knowledge, is what being an Army dentist is all about.

“It’s an honor to be the brigade dentist for the Currahees,” Raymond expressed. “And I feel fortunate that I had the opportunity to work with the ANA commandos and I hope to do so again in the future.”