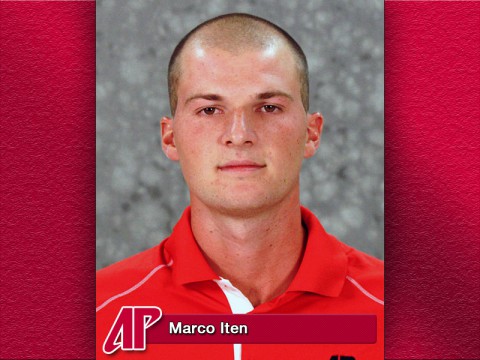 The senior carded rounds of 73-73-69 to finish at 215 (-1) and top a field of 75 golfers that included five Top 100 teams and five Top 250 golfers. Iten’s final-round 69 (-3) came in extremely windy conditions and featured a quartet of birdies—he finished the tourney with five straight pars.

He helped the Governors team to a third-place finish out of 14 total squads, including victories against such high major programs as Indiana and Notre Dame. It marked Iten’s second career medalist honors and first since 2011. A two-time All-OVC selection, Iten currently ranks sixth in the OVC in stroke average (73.0).

The Niederglatt, Switzerland native has been the Governors best finisher in all three spring tournaments that also includes fourth place at the Wexford Plantation Intercollegiate, after owning APSU’s best finish (4th) to wrap up the fall in the F&M Bank APSU Intercollegiate.

With his strong finish in Florida, Iten now has moved up to 244th in the most recent Golfstat player rankings.