Ledbetter, KY – A pair of veterans will lead a young Austin Peay State University women’s golf team into its season-opening event as the Lady Govs travel 1 ½ hours up I-24 to participate in the Jan Weaver-Murray State Invitational.

The Lady Govs will be paced by junior Jessica Cathey, a two-time All-Ohio Valley Conference selection.

However, the rest of the team will be sophomores and freshmen. In fact, local talent AnnaMichelle Moore, who starred at Clarksville Academy just a year ago, qualified behind Cathey in the No. 2 spot with Mueller third along with sophomores Amber Bosworth and Morgan Kauffman rounding out the team in the fourth and fifth spots. Sophomore Morgan Gardner and walk-on freshman Sarah Struble will play as individuals. 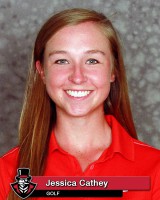 “We are looking forward to getting the season started,” APSU coach Sarah Robson. “The team has come back from summer break very competitive. The girls have played well in qualifying and are ready for competition.

“Meghan and Jessica will need to help our freshmen this first week as they get acclimated to Division I competition.  AnnaMichelle qualified second behind Jessica so it will be important for our upperclassmen to help her deal with nerves and expectations as she begins her college career.”

The Lady Govs are coming off a sixth-place Ohio Valley Conference finish last spring. Cathey along with Bosworth and Kauffman played in last season’s tournament. Robson is confident that duo along with her other two sophomores, Morgan Gardner and Kelsey Schutt, are ready to make a significant jump forward in their respective performances. 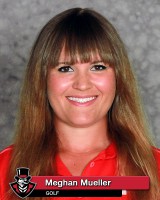 “Amber is ready to have an outstanding year,” Robson said.  “She worked hard over the summer on the swing changes we made last year and is hitting the ball very well.

“We will need to stay confident and in the moment this week to be successful.  Most of us know this golf course well, that should give us some confidence going into Monday. The good thing is AnnaMichelle and Sarah both have played 36 (single-day) holes before so Monday will not be completely new to them. However, they have not had the 18 before and 18 after so they will need work hard mentally to play one shot at a time and not check out on us in the middle of a round.”

This is the sixth year for the tournament but the first time as the Jan Weaver-Murray State Invitational. Weaver was a longtime professor who helped initiate Murray’s student-athlete computer lab/study hall. She died in 2009.