Clarksville, TN – Robbie Wilson, who has been the Great Midwest Athletic Conference Coach of the Year the last two seasons at Trevecca, has been hired as new men’s golf coach at Austin Peay State University.

Wilson, who grew up playing golf at the Clarksville Country Club and is well known in the Clarksville Golf Community, comes to APSU after spending the last eight years as Trevecca’s head coach. 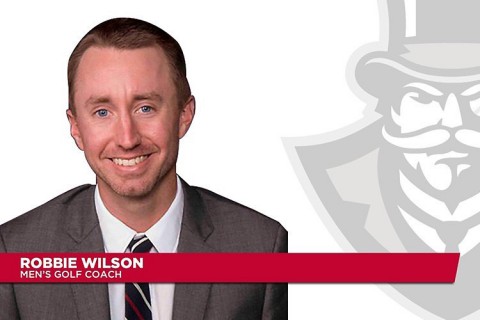 In addition, he mentored 16 all-conference performers and two conference freshman of the year selections. Three times he had players finish in the top-40 in national scoring average at either the NAIA or Division II level.

Off the course, Wilson coached 18 conference scholar-athletes, including a trio of NAIA National Scholar-Athletes Award recipients.

“When we started the search process for our next golf coach, we focused on finding a person that best reflected our culture of excellence statements in the classroom, competition and community,” said APSU Athletics Director Derek van der Merwe. “Robbie Wilson profoundly touched each of these three areas in a unique way. He has had to recruit outstanding students, he has achieved significant success, and he already has deep connections in the Clarksville golf community. Now, let’s take the next step in Governors golf.”

Wilson, an Ashland City Tennessee  native, oversaw fundraising and construction of an on-campus short-game facility at Trevecca in 2013.

In addition to his coaching duties, he served as Game-Day management coordinator for Trevecca men and women’s basketball the last six years while also being Trevecca Director of Intramural Athletics since 2008.

Wilson played his collegiate golf at Trevecca, where he earned his bachelor’s degree in 2006.