Clarksville, TN – After collecting that elusive road victory, Austin Peay men’s basketball team will attempt to build momentum as it plays its next five games at home.

The Governors will play host to Morehead State, 7:00pm, Wednesday, in an important OVC contest for both clubs. The Govs enter the contest 2-4 in OVC play after claiming a 56-52 decision, Saturday, at Eastern Illinois. 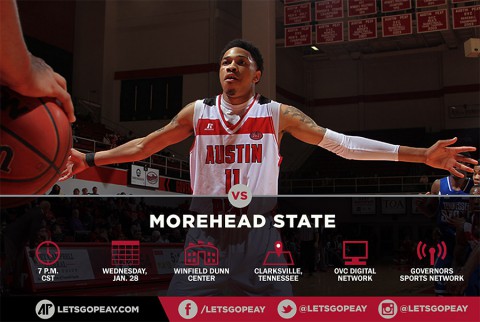 The Governors rallied from a 13-point second-half deficit to down the Panthers.

The Governors defense, which allowed 50 percent shooting in the first half, proved more suffocating in the second half, permitting just 33 percent (9 of 27) shooting.

It also forced the Panthers into 10 second-half turnovers, many against the Govs full-court pressure.

Meanwhile, freshman guard Josh Robinson is coming off a weekend in which he earned OVC Freshman of the Week honors after averaging 14 points per game. He scored 11 against EIU, including back-to-back three pointers that helped wiped out a 13-point second-half deficit. He also knocked down three free throws in the final five seconds to ensure the victory.

The Governors will be playing a Morehead State team, Wednesday, which has overcome a slow OVC start to move into second place in the East Division at 4-3.

The Eagles come to the Dunn Center seeking not only their third straight victory but their third consecutive OVC road victory as well.

The Eagles are built around their defensive and rebounding. They are permitting just 65.8 points per game and allowing the opponents to shoot just 44 percent from the floor.

Despite not having dominating rebounder (Bill Reader is their leader at 5.1 rpg), the Eagles out-board their opponent by an impressive 4.6 rebounds per contest, including 13 offensive grabs per game that lead to second-chance opportunities.

This is the 105th meeting between Austin Peay and Morehead State, a pair of Ohio Valley Conference foes, with the Governors trailing 51-53. The two teams met just one time last season with Morehead State claiming a 90-88 double-overtime decision in Morehead, February 19th, 2014.