Clarksville, TN – The celebrated tenor Lawrence Brownlee will be in concert at the George and Sharon Mabry Concert Hall on the campus of Austin Peay State University in the Music/Mass Communication Building, Eighth and Marion Streets, Clarksville, Tennessee this Tuesday, March 3rd, 2015 at 7:30pm.

It is phenomenal to have Brownlee in Clarksville between engagements in Europe, the Metropolitan Opera and Carnegie Hall. He is the most in-demand American tenor in the world singing the bel canto repertoire. Brownlee sings with “elegance and grace” and has a voice that has been described as astonishingly beautiful and powerful. 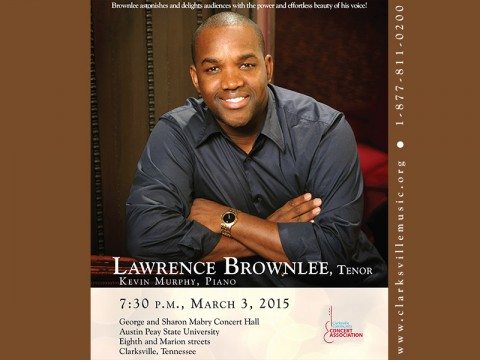 The Concert will be held Tuesday, March 3rd, 2015 at 7:40pm at the Mabry Concert Hall. Tickets can be purchases online here.

Brownlee will sing a program that displays his depth and versatility, beginning with the virtuosity of a Mozart concert aria, moving effortlessly through art songs and the lilting Irish poetry of James Joyce and William Yeats as set by Ben Moore.

The program continues with five popular folk songs of Argentina and ends with a set of deeply moving spirituals arranged by Damien Sneed. These spirituals, from one of Lawrence Brownlee’s critically-acclaimed recordings, were performed with Sneed at the Lincoln Center’s American Songbook series.

Brownlee sings internationally on the world’s most important opera houses and concert stages.

In addition to being a winner at the 2001 Metropolitan Opera National Council Auditions, Mr. Brownlee was named Seattle Opera’s 2008 Artist of the Year, received the Opera Company of Philadelphia’s 2007 Alter Award for Artistic Excellence, and was the winner of both the 2006 Marian Anderson and Richard Tucker Awards, a feat never before achieved by any artist in the same year.

His compact disc “Virtuoso Rossini Arias” was nominated for a 2015 Grammy. He participated in young artist programs at both the Seattle and Wolf Trap Operas. An Ohio native, Mr. Brownlee received a Bachelor of Arts degree from Anderson University and a Master of Music degree from Indiana University. He is a Life Member of Kappa Alpha Psi Fraternity, Inc.

This concert is sponsored by the Clarksville Community Concert Association and Austin Peay State University in partnership with the National Museum of African American Music and the Nashville Opera.

The Clarksville Community Concert Association (CCCA) is a non-profit 501 ( c) 3 organization dedicated to presenting music performances of high artistic merit in Clarksville-Montgomery County and promoting interest in and enjoyment of live concerts through community outreach and education.

The CCCA concert series presents high quality artists of national and international renown in the critically acclaimed George and Sharon Mabry Concert Hall on the campus of Austin Peay State University in the Music/Mass Communication Building, Eighth and Marion streets in Clarksville, Tennessee.