Montgomery County, TN – Just days after her family reported her missing, a Montgomery County Sheriff’s Investigator was able to track down a kidnapping victim and arrest her alleged captor.

Gary Nations, 32, who gave a Hendersonville, Tennessee address was charged by MCSO officials with kidnapping and aggravated assault. He already had warrants out for violation of probation and escape. His bond was set at $255,000. 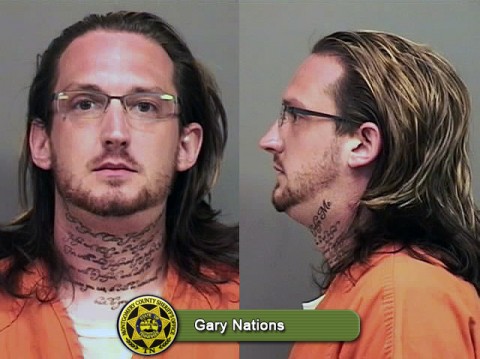 The MCSO received a report for the missing woman Saturday and yesterday, Investigator Geoff Blanchard began looking into it.

“I know how (the victim) is,” Blanchard said. “She never would have been without her phone. Her dogs are like her children, and she left without making arrangements for anyone to take care of them. She also rarely goes without being in contact with her mother.”

All of these things were a red flag to Blanchard.

“Because of community policing, where our investigators deal with crimes in their specific zones and get to know people in those zones, Blanchard knew something was going on,” said Lt. Brian Prentice.

Through his investigation, Blanchard found that Nations had reportedly told the victim he had warrants out for his arrest, and told her if she didn’t come with him, he would kill her.

The victim told authorities that Nations, yesterday, forced her to call her mother and let her know she was alive because law enforcement was looking for her. She had called from an automotive shop in Lawrenceburg, Tennessee where their vehicle had broken down.

Blanchard called the shop back, and the victim answered, alluding to the fact that her life was in danger.

Investigator Julie Webb contacted Lawrenceburg Police as Nations and the victim were leaving on foot, and MCSO officials brought him back to book him into the Montgomery County Jail. Officials also returned the victim safely home.

The victim told authorities that earlier, at a hotel, he had choked her to the point to where she nearly lost consciousness.

“If it wasn’t for Investigator Blanchard’s due diligence in trying to find her, she might not be here today,” said Sgt. Steve Heise. “We can’t say enough about how he went above and beyond to make sure this victim made it home safely.”

Montgomery County Sheriff John Fuson also extended his thanks to Lawrenceburg Police for responding to assist so quickly and applauded Investigator Blanchard for staying the course on this case.

“Because of the way we assign our deputies and investigators to zones, they get to know the people in those areas,” said Fuson. “Building these relationships with the community has proven to be a critical part of the success that we have had closing cases and arresting offenders. If that relationship had not been previously built by Investigator Blanchard, we may not have found this woman as quickly as we did.”