Be More Like Wade 5k Run a huge success 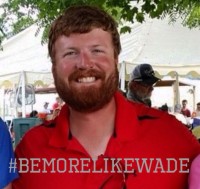 Cunningham, TN – On Saturday, July 25th the Be More Like Wade 5k Scholarship Run/Walk/Crawl was held at the Central Civitan Club building just before the 107th annual Lone Oak Picnic. The race started at 8:30am.

Wade Morgan passed away on March 3rd, 2015. He was a Montgomery Central High School graduate from the class of 2002. By creating this event the organizers hope Wade’s memory will live on and more people will #bemorelikewade.

The weather was warm with a slight breeze at the start of the event. Everyone was laughing and enjoying one an others company. The 5k drew 235 participants. Members of Buddy Ball also took part in the event.

“The event went better than we ever expect,” stated Morgan. “We expected maybe 50 since it was our first year and we didn’t plan 6 months in advance.”

Over $15,000 was raised for #bemorelikewade scholarship fund and donations are still coming in. Donations can be made in person at Cumberland Bank and Trust: make checks out to “Be More like Wade”.

All proceeds will go into a scholarship fund which will be given to a Montgomery Central Senior who demonstrates similar characteristics of #bemorelikewade. He exemplified the true meaning of a genuine person by being a selfless individual and always having an optimistic outlook on life.

“Wade would be very proud of his community,” stated Morgan. “He would do this for someone else and for all these people to come out and do it for him just means so much. I just know that he’s smiling in heaven. It’s just a for sure thing.”

The Be More Like Wade 5k Scholarship Run/Walk/Crawl is going to be an annual event taking place on the same day as the Lone Oak Picnic.