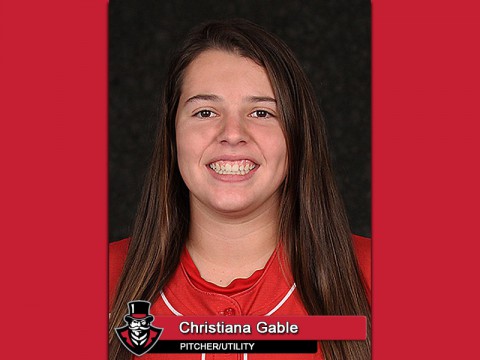 Gable, who will be a rising junior on this year’s Lady Govs softball team, is from Nolensville, TN, but qualifies as a dual citizen with a German passport with her mother, Elke, growing up near Heidelburg, Germany and a native German.

In fact, Gable was the only player on the 17-member national team, put together by head coach Udo Dehmel, that wasn’t a current player on one the German League teams coming into the championships, while also being the youngest player on the squad – short of her 20th birthday by nine days at the tournaments start on July 19th.

It wouldn’t take long for Gable to make an impact for the German team, getting the start in the circle in the tournament’s opener versus Denmark and throwing a no-hitter, in a 15-0 victory.

She would strikeout three and allow only two runners to reach in the win – a second-inning walk and by an error in the third inning – but both were erased by being thrown out trying to steal second base.

Offensively, Gable was 0-2 at the plate, but she did draw a walk and scored a run.

Gabe wouldn’t play in the 14-2 win versus Israel, the only contest she wouldn’t appear in during the tournament, but returned to the starting lineup versus Sweden – a 17-3 win – going 2-for-4 at the plate, including a double, while scoring twice and driving in four.

She would also come in to pitch 1.2 innings of no-hit, shutout relief, striking out four and not walking a batter in picking up her second win of the tournament.

Gable would follow that performance with a 1-for-2 effort versus Great Britain – a 2-1 loss by Germany – which included a triple and two walks, while also driving in the only run of the game for Germany.

The next game versus the Czech Republic, an 8-1 loss, would be the toughest of the tournament for Gable, as she went 0-for-3 at the plate – all strikeouts – while also picking up her only loss of the tournament.

Overall, Gable would finish the tournament batting .263, while leading the team with eight RBIs. She would also tie for the team lead with two pithing wins and a team-best eight strikeouts in seven total innings of work.

This marks back-to-back summers that Gable has put together solid performances for Germany, having played on the country’s 19-year-old and under junior team at the 2014 European Junior Women’s Softball Championships.