In the end, only 25 Screaming Eagle Soldiers stood in line at the Lozado Physical Fitness Center this morning to be awarded the coveted badge.

Many medical Soldiers who sport the EFMB will say it’s one of the most challenging things they have accomplished in their careers, and the proof is in the numbers.

With only 3 percent of the Army’s medical community wearing the badge, it is widely considered a crowning achievement to Soldiers within the 68 career management field, which includes combat medics, radiologists, physician’s assistants and all other medical military occupational specialty personnel.

“There is typically an 80 percent attrition rate,” said Sgt. 1st Class Jason M. Morgan, first sergeant, 86th Combat Support Hospital. “Everyone thinks the EFMB testing is just medical, but it’s not. In order to pass, you need to have a well-rounded medical Soldier that can use a radio, that can ruck; they have to know what they are doing with various weapon systems. It’s way more than just first aid.”

The badge is meant to promote confidence and provide tangible recognition of personnel who can expertly perform common Soldier tasks and apply the principles of basic medical care in a field environment. 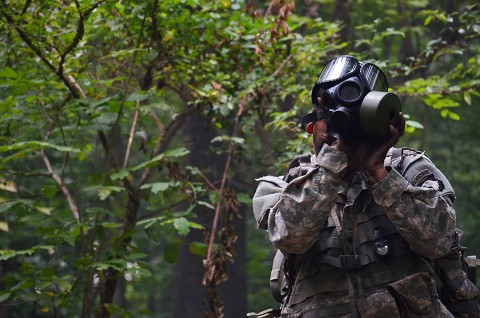 “The toughest part so far has been combat trauma lane 1,” said Pfc. Arron R. Juopperi, Headquarters and Headquarters Company, 1st Battalion, 26th Infantry Regiment, 2nd Brigade Combat Team, 101st Airborne Division. “It started with disassembling and reassembling my M9 [handgun], then I had to get a casualty to a safe place while taking enemy fire. After I had him at a safe location, I had to treat him while explaining everything I was doing. It was just a lot to remember.”

Soldiers in Fort Campbell who qualify for the EFMB have one chance per year to attempt to earn the badge. This year, the Strike Soldiers of 2nd BCT played an instrumental role in the planning, logistics and execution of the test, which took place from July 27th to August 6th. 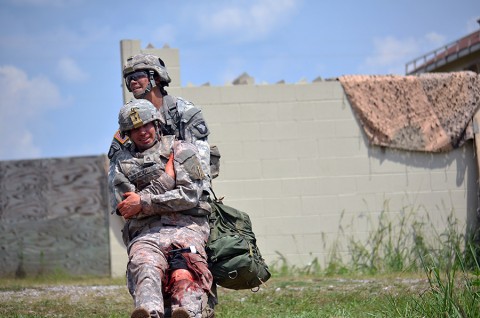 The first week of the course was training and preparation for the casualty trauma lanes the candidates would be tested on. Soldiers had to pass an Army Physical Fitness Test, qualify on their weapons systems and be CPR certified before even being considered as a candidate.

“The candidates actually get to see what they’re going to be tested on throughout the first week,” said Morgan. “They get hands-on with the equipment and the overall layout and procedures on the lanes. After that week is over, each remaining candidate will be tested on the training that was conducted. If you fail a major event during test week, that’s it – you’re done. Whereas some Army schools, you’re given the opportunity to retrain; for the EFMB, you’re not.”

The testing phase was comprised of being evaluated on the successful completion of tactical combat casualty care and medical and casualty evacuation, which is the Army’s standard for treating a casualty for injuries in a hasty matter and getting them to a safe location for further treatment.

In addition, the Soldiers were tested on how to successfully communicate over a radio; proficiency in warrior tasks and drills such as chemical, biological, radiological, and nuclear hazards; reacting to enemy contact; day and night land navigation; and a written test. The culminating event was a 12-mile ruck march, which had to be completed in 3 hours or less.

“Back in 2004 when I went through the challenge, combat trauma lane 1 was the EMT lane, which was mostly just mental,” said 1st Sgt. Craig B. Burnard, Co. C, 526th Brigade Support Battalion, 2nd BCT. “Now CTL 1 is all medical tasks, and with that is a 147 subtasks, which puts a lot of stress on Soldiers.” 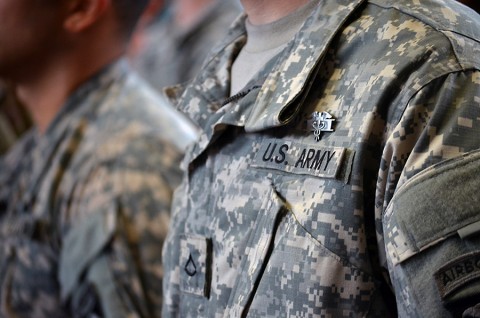 The gym was silent as the silver badges were pinned to the medics’ chests. Once the final Soldier was pinned, the crowd roared with applause praising them on their hard-earned efforts.

One of the remaining 25, Juopperi, stood proudly as his badge was pinned on his chest. He sighed a sigh of relief after it was finally over.

“It feels great to be finally done,” said Juopperi. “I’m so glad I did it though.”